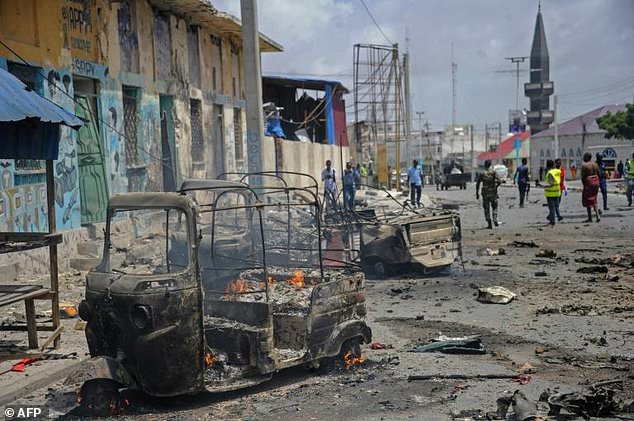 Somali tech entrepreneurs aim to send a message of hope and progress at a summit in battle-scarred Mogadishu, seen here after a bomb attack in July

Tech entrepreneurs in Somalia are holding a first ever summit in battle-scarred Mogadishu, attracting hundreds to talk about business and innovation in a city more used to conflict and suffering.

The three-day event that began Tuesday was conceived by a group of young Somalis to showcase the work of dozens of local companies.

“This is an opportunity to change negative impressions of Somalia, to give an image other than that of war, chaos and starvation,” said Abdihakim Ainte, founder of Mogadishu’s iRise Hub and the event’s main organiser.

Somalia collapsed into civil war in 1991 and since then has endured successive rounds of conflict involving clan-based militias, foreign armies and, latterly, Al-Qaeda affiliated jihadists the Al-Shabaab.

While a succession of internationally-backed governments have failed to stem corruption or bring peace, Somali entrepreneurship has persisted and economic activity thrived, despite the absence of a functioning state.

Tech innovation is just the latest example, and Ainte said he hoped it might “play a role in rebuilding the country and its economy.”

Despite the ambitious talk, fear of Shabaab militants meant the summit was held at a well-guarded hall close to the sprawling, fortified Mogadishu airport “Green Zone” that is home to the UN and aid agencies, foreign embassies and an African Union military force.

E-commerce startup Gulivery was among the companies showing their apps at the summit.

Deeq Mohamed, a 30-year-old British-Somali who returned home and established the delivery company with his wife, said there were plenty of opportunities in providing services that are already familiar in more peaceful, prosperous places.

Members of Somalia’s far-flung diaspora are well-placed to seize the moment.

“When we moved from London to Hargeisa (in breakaway Somaliland) we were looking for a delivery service provider, but we could not find one. We were not the only ones, so we decided to start a delivery company,” he said.

After expanding to Mogadishu, Gulivery’s husband-and-wife team have their eyes on Djibouti and Ethiopia.

Gulivery’s motorcycle couriers allow clients — mostly restaurants — to dodge the dangers of insecurity and bombings on Mogadishu’s streets, as well as traffic, and expand their customer base.

Mohamed said Gulivery has over 10,000 registered users and has made more than 9,000 deliveries since it began operating last year.

Exploiting gaps left by a state that fails to provide basic services, Ileys Energy sells solar and LED lights that make up for the inadequacy of grid electricity.

“We are already sending supplies to most parts of the country and plan to move into other countries in East Africa,” he said.

Abdikhaliq Ahmed, CEO of software company Yool Tech, which designs and hosts websites, welcomed the summit as a chance to showcase Somali knowhow and inspire others.

“We are eyeing a future where we provide technology-related services that people previously sought outside the country,” he said.

“Summits like this one boost the moral of the youth so they will think about staying in their country and working in it.”