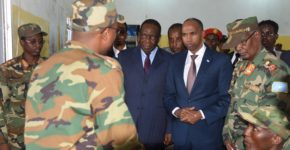 Hassan Ali Khaire, the Prime Minister of Somalia, officiated at the launch of the exercise in Dhusamareb, the capital of the Galmudug State of Somalia. Also present were officials from the African Union Mission in Somalia (AMISOM) and the Intergovernmental Authority on Development (IGAD) regional bloc.

The ASWJ militants will be integrated into the security agencies that include the army, police, intelligence service, and custodial corps. The integration, which involves capturing an individuals’ biometrics, supports efforts to build active Somali Security Forces.

Prime Minister Khaire called on the integrated ASWJ forces to join in efforts to defend their state and Somalia. “We will not give up on ensuring the achievement of stability in Galmudug,” he added.

The ASWJ forces based in Dhusamareb is responsible for kicking the extremist group Al-Shabaab from most parts of the region. In December 2017, ASWJ signed a power-sharing agreement with the state administration.

Ambassador Francisco Madeira, the Special Representative of the Chairperson of the African Union Commission (SRCC) for Somalia, described the process as a milestone in reconciliation efforts.

He praised Somali leaders for the commitment to peace and cooperation and commended the efforts of the government to reach out to all political forces to reach lasting peace and stability in Galmudug.

Ambassador Madeira, who is also the Head of AMISOM, remarked that the integration of ASWJ militants reinforces AMISOM’s mandate.

“This initiative is a clear testament that the journey to unity, integration, and reconciliation is in full swing,” remarked Ambassador Madeira, before adding, “We are leaving this place assured that Somalia’s future is bright. Somalia is on the path to overcoming challenges.”

Dr. Mohamed Ali Guyo, the IGAD Special Envoy to the Horn of Africa, appealed to all stakeholders in Galmudug State to support initiatives that promote peace, reconciliation and stability.

“We look forward to an inclusive process, accommodating all forces that can take the fight to Al-Shabaab and recover the remaining areas,” Dr. Guyo said.

“This initiative will herald a unified Galmudug and Somalia. We are doing this with a clear conscience,” said Sheikh Shakir, who is also Galmudug state’s Chief of Ministers.