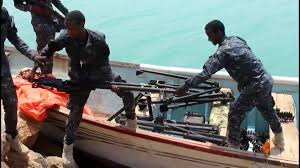 A boat loaded with illegal weapons was intercepted in Somalia’s semi-autonomous region of Puntland. Puntland maritime police force conducted operations aimed at beefing security in the territorial waters surrounding Bosasao which led to the capture of dozen vessels used for ferrying migrants willing to travel to the war ravaged country of Yemen and Saudi Arabia. Puntland maritime police chief, Mr. Muhyadin Ahmed Muse said that the operation launched was aimed at capturing smugglers and vessels carrying illegal weapons. Most of vessels which also transport migrants from Ethiopia and Somalia travel thorough Bosaso as gateway to Yemen and Saudi Arabia.