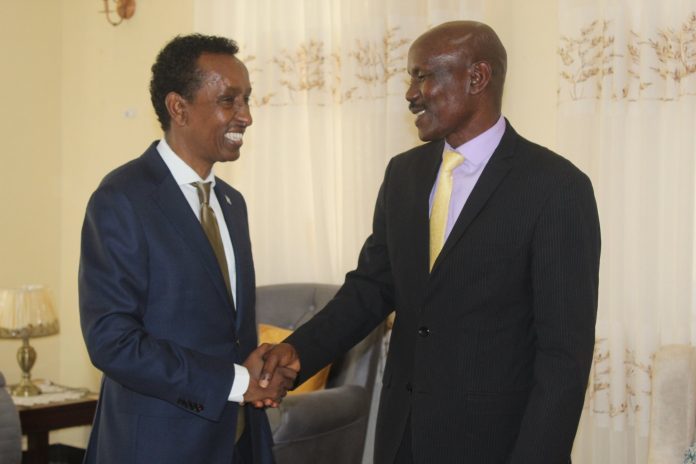 The diplomatic engagement that Somaliland is having with Kenya has once again irked the installed gov in Villa Somalia.

Kenyan gov has recently announced that the ministry of foreign affairs has earmarked the budget for establishing diplomatic consulate in Hargeisa in an attempt to boost its trade with the unrecognized enclave of Somaliland.

Once Kenya asserted its clear intention that it is going to set up diplomatic office in Somalia, the Villa Somalian authorities have embarked on unprecedented efforts to undermine Somaliland diplomatic moves in the right track.

The Somalian FM has on Wednesday summoned the Kenyan ambassador to Somalia, Lucas Tumbo, and held unplanned meeting took place at the foreign ministry in Mogadishu.

A statement issued by Somalian FM said that the meeting was aimed at boosting the close bilateral ties between Kenya and Somalia.

The two neighboring countries are engaged in a territorial water dispute in the Ocean which led the deterioration of the ties between the two states.

The Kenyan Commerce secretary, Peter Munya has asserted that Kenya wants to boost its Miraa trade with Somaliland and the consulate in Hargeisa will negotiate with Somaliland gov over Miraa tariffs and taxes.

The Kenyan airways is also expected to launch direct flights to Hargeisa soon.

The Somaliland FM met with secretary at the Kenyan foreign affairs ministry where Kenya called Somaliland a country in a tweet.

The tweet had angered Villa Somalia authority and later summoned General Lucas Tumbo, the Kenyan Envoy to Somalia and protested over the move.

The Kenyan FM, Ms. Monica Juma clarified its position on the status of Somaliland and once said in BBC Somali interview that Kenya is honoring the colonial boundaries in which the African Union (AU) ratified in 1964.

The  installed gov in Villa Somalia has a hidden policy which is aimed at isolating Somaliland diplomatically.