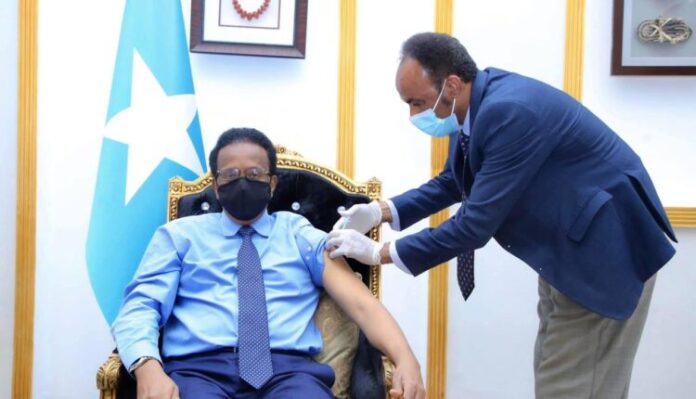 President Farmajo has received his first dose of the AstraZeneca-Oxford vaccine on Tuesday, a day after the first batch arrived in Somalia’s capital Mogadishu.

President Farmajo said he was taking the vaccine to show Somalis that it’s safe.

“I expressed faith in the vaccination efforts by endorsing it myself earlier today as we continue distributing it to ensure the protection of our citizens especially Frontline workers. Let us flatten the curve by adhering to the safety measures to Stop COVID-19 in Somalia,” he said.

Somalia began its vaccination roll-out on Tuesday after it received 300,000 doses on Monday. The nation’s health ministry said that it would be prioritizing frontline workers, the elderly and those with chronic health conditions. The government says 2,000 health workers have been trained for the exercise.

The country is grappling with a resurgence of COVID-19 cases, with infection rates jumping from 5,273 cases to 9,328 in a single month. The sudden spike is leading experts to speculate whether a more infectious variant of the coronavirus is spreading.

Farmajo’s vaccination comes as global health leaders are preparing to meet to discuss the AstraZeneca-Oxford after nearly a dozen countries, mainly in Europe, have suspended their use of the AstraZeneca-Oxford vaccine. Germany, France, Italy and the Netherland joined Sweden, Norway, Denmark and Bulgaria in halting their use. There are fears that the job can cause blood clots in patients. Outside of Europe, Indonesia and Venezuela announced they would not be giving their citizens the Oxford jab.

The WHO dismissed the concerns and urged nations to continue vaccinating. Canada said it would be giving the vaccine to citizens over 65. Australia has said it will continue to use the vaccine.

The vaccine was developed by AstraZeneca and the University of Oxford in Britain. The UK has administered over 11m doses to its citizens.

Somalia received the vaccine under the World Health Organization’s global vaccine-sharing program COVAX. The initiative is trying to level the playing field for low- and middle-income countries to access the vaccine through donations, licensing and build purchases. The Health Ministry announced that it would be creating a social mobilizer team to create awareness on the importance of being vaccinated. Somalia aims to vaccinate 20% of its population.

The WHO announced on Tuesday that 40,000 doses of the Oxford AstraZeneca vaccine arrived in Puntland. These doses are reserved for frontline workers and the elderly.