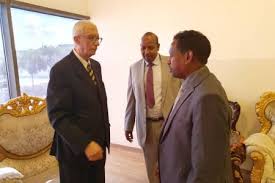 Mr. Loza’s delegation was warmly welcomed by Mayor of Mogadishu and other foreign officials at the airport in the capital of Somalia.

Egyptian delegation and Somalia will discuss on bilateral relations and political developments made in Somalia.

Somalia and Egypt signed last March a memorandum of understanding on security cooperation, a document that allows for concentrated security coordination between Cairo and Mogadishu.

Mogadishu and Cairo also agreed to increase intelligence cooperation to weaken terrorist groups in both territories.

Somalia is in war on Al Shabaab, an al Qaeda linked group, who carried out deadly attacks in Mogadishu, while Egypt is also fighting both the Islamic State (IS) and al-Qaeda-aligned groups in its own nation.