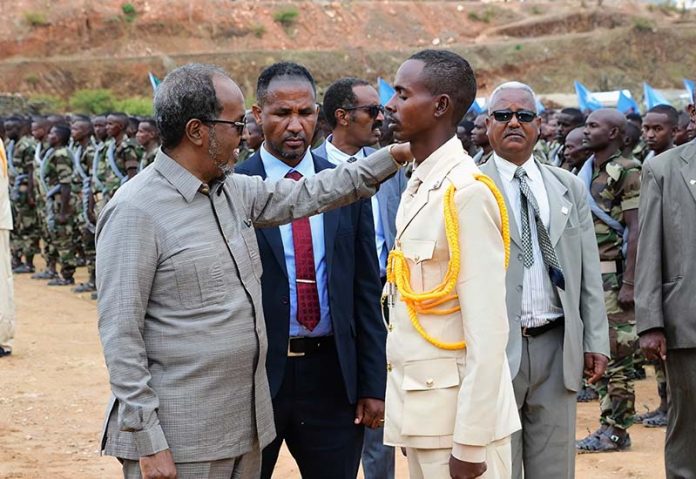 Somalia’s President Hassan Sheikh Mohamud was allowed access on Sunday to a training camp where thousands of Somali recruits have been clandestinely trained and repeated his pledge to return them home.

The soldiers had been secretly taken to Eritrea in 2019 following false promises that they would be enlisted in Qatar’s security forces to guard the 2022 World Cup. Their families have long demanded an explanation from authorities over the whereabouts of their sons.

There were multiple media reports in 2021 that Somali soldiers trained by Eritrea had been deployed to fight alongside Eritrean and Ethiopian soldiers during Tigray conflict. Both the United Nations and the United States confirmed that Somali troops had taken part in Abiy Ahmed’s offensive in late 2020 against authorities of the northern region of Tigray.

Eritrean Minister of Information tweeted on Sunday that Somali troops had completed a three-year military training. Images showed a few thousand soldiers taking part in a parade despite claims by officials that their number was more than 5,000. Their faces looked worn as their families earlier said that they have been coping with harsh living conditions and were held in training camps without proper nutrition, medical attention and sufficient food.

Abdirazak Mohamed, an intelligence official keeping the file of the clandestinely trained soldiers, was the only Somali official accompanying President Mohamud in his trip. It’s not clear whether Eritrean authorities denied other Somali officials access to the area.

Before his election in May, Mohamud said the soldiers had been sold and had participated in Ethiopia’s Tigray war.

Unlike a recent visit to Somali commandos receiving training in Turkey, Mohamud was not allowed to hold face-to-face meetings with soldiers and listen to them. In Isparta, he was able to take selfies with soldiers and had given a recorded speech about his government’s plans.

Analysts say training Somali soldiers in Eritrea was a mistake and there are questions that still need to be answered.

There were still unanswered questions, including the number of soldiers alive and those killed as visuals showed less than 2000 soldiers in the parade compared to over 5000 claimed by authorities, he added.