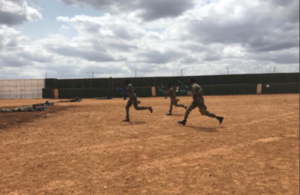 The course forms part of the UK’s ongoing commitment to bring peace and security to the region.

This month, the Somali National Army celebrated the graduation of a further 98 soldiers from British military training in Baidoa, the capital of Southwest State in Somalia.

The UK has built a training centre in Baidoa, including a state-of-the-art firing range that was opened by Southwest State’s President, Abdiaziz Hassan Mohamed Laftagareen, and the UK’s Africa Minister, Andrew Stephenson, on 21 August. Construction of 450 barracks for the Somali army has just started on the same site.

The UK training has already shown its value. Attacks in Baidoa have fallen since the Somali army built defensive positions around the city as part of their course, and some of those on the course used their new skills in a successful attack against Al Shabaab in the area of Daynunay this month.

Speaking during the graduation ceremony, the Commander of British Forces in Somalia, Colonel JL Baynham, said:

The training is being delivered by highly experienced specialists. It’s focused on building really strong infantry skills, which are what the Somali army most needs to defeat Al Shabaab. The Somali soldiers are very able and keen to learn. We are already seeing the benefits, for the individuals, their units and the security of the area.

The Somalis are working to improve security after decades of conflict and terrorism. The UK is a major partner and the only country providing military training outside Mogadishu. Baidoa is a vital location in the fight against Al Shabaab. We need to stay the course, but over the last year, Somalia has made real progress towards building its future army, and in conducting operations. We’re delighted to support that.

The course is part of an on-going programme of support to the Somali National Army’s 60 Division. Graduates will now receive additional medical, planning and command training.

The UK has delivered training to over 900 members of the Somali National Army since January 2017. The focus has been on medical skills, leadership development, intelligence, equipment care, logistics and the rule of law.