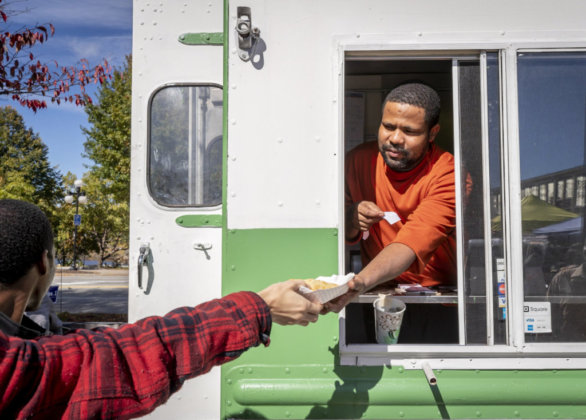 LEWISTON — The brakes are showing some wear. The steering is soft. And there’s no oven to make African cakes in. But inside Isuken Co-op, Maine’s new – and first – Somali Bantu farm-to-table food truck, the focus is on moving forward.

On a gloomy Saturday afternoon in October, Ghali Farah was working the cash register, an iPad with a Square attachment. Habiba Hussein was delicately running a wet finger around the edge of an uncooked sambusa, a savory pastry, to seal it before Isaak Gawo put it into the fryer. Isnino Ibrahim was at the cleaning station. Isuken means unity, and based on the tight squeeze in the truck for the crew of five, it seemed like an apt name in many ways.

Mohamed Dekow, who works with the group and interprets as needed, explained the menu. Soup was available, a vegetable stew made with ingredients grown by New American farmers in Lisbon and Lewiston, typically served with injera, an East African flatbread. It would be perfect to eat on a chilly October day, maybe with a chai on the side, Dekow said. “It warms you up,” he said. The co-op had crossed side salads off its menu, because it was late enough in the season that the local Somali Bantu farmers weren’t producing much in the way of greens.

But there were four kinds of sambusas: chicken, beef, fish and a vegetable version that was vegan. A sambusa is a triangular savory pastry that looks like a cross between an Indian samosa and one of those Sara Lee fruit turnovers from decades past. All of the meat served by the Isuken Co-op is halal, or prepared according to the rules prescribed by Muslim law.

No matter the protein within, the sambusa are filled with a medley of fresh vegetables, carrots, corn, green beans, green peppers, onions, cilantro, scallions and garlic, all diced, spiced with hot pepper. For the Somali Bantu cooperative, the recipes stem from their past lives in Somalia, where sambusas made with food from their own farms would have been a commonplace item.

But whereas dishes from childhood typically evoke the best memories, the members of Isuken Co-op have deeply fraught relationships with their country of origin. Ask Gawo if the sambusas cooked in a parking lot on Sabattus Street in Lewiston bring back good thoughts of home, and he answers frankly, with a warm smile that offers a barricade to pity, that he does not have any happy memories of Somalia, a place he fled on foot as a teenager in the midst of civil war.

“It is not happy for me, my country, even the farm,” Gawo said.

When that war began in 1991, the Bantu population, in the south of Somalia, where they were farmers, was persecuted. Everything his community had, even the cows – particularly the cows – were stripped away from them by soldiers, until there was no choice but to leave.

He and his family, including his parents and younger sister, walked from their home to Kenya, a 15-day journey. They were stopped periodically and he watched his sister, then 14, and mother, be taken off the trail and raped by soldiers.

His mother would plead, he said, for the soldiers to take her instead of his sister. The soldiers laughed at her. ‘ “Me, I’m ready,’ she would say to them,” Gawo remembers. ” ‘And they would say, ‘you is old.’ ” They would take both women. Gawo and his father would wait, until the women were allowed to come back.

The family would continue on the journey, the men carrying the women, who Gawo said were too bloody, too injured, to walk. This happened over and over as they made their way to Kenya, he said. How many times?

Once they arrived in Kenya, they lived in a refugee camp. That was dangerous too, but at least offered hope that they might someday be accepted as refugees in another country. Gawo lived in the camp for more than a decade, where he said Somali Bantu had “no honor, no power.” No jobs, either, unless you were lucky enough to get some work with UNICEF. In 2004 he came to the United States as a refugee, living in Indianapolis until he arrived in Maine in 2006.

“For me, I will not come back in my country, ever,” Gawo said.

But the heritage of the food came with him as it did for the women in Isuken Co-op. He jokingly calls them all his mother, although none gave birth to him. Today their families and friends are farming again, on Packard-Littlefield farm in Lisbon and New Roots, another cooperative Somali Bantu project in Lewiston. The Isuken Co-op buys meat from local halal markets and other ingredients from Walmart.

In Maine’s fast-moving food world, it’s hard to lay claim to being the first, whether you are making gourmet bagels or serving up poke to Portlanders. But Isuken is definitely the first food truck to serve Somali Bantu dishes in Maine and New England and quite possibly the entire East Coast.

That’s not to say that there aren’t Somali food trucks in North America, all of which have cropped up in the last five years. Toronto has Kal & Mooy, a Somali food truck that opened in 2014, and there is a food truck in the Twin Cities of Minnesota called Sambusa, run by a Somali catering company called Alimama. San Jose has Safari Kitchen food truck, serving traditional Somali food.

Jonah Fertig-Burd, who works closely with Isuken as the director of cooperative food systems for the Cooperative Development Institute (an organization that works throughout New England and New York), said he believes Isuken to be the first to feature Somali Bantu chefs and owners.

Since the truck opened in late September, it has made weekly trips to the outdoor farmers market in Lewiston, and will continue to do so throughout October. Last week, Isuken Co-op traveled to Portland, to serve an event at the University of Southern Maine. Most days though, it is parked on Sabattus Street, next to a farmstand operated seasonally by New Roots Cooperative Farm (now closed for the season).

The truck was purchased earlier this year with the help of a Kickstarter fund and a loan from the Cooperative Fund of New England.

It had been a hotdog truck and as food trucks go, was something of a bargain ($22,000), but with that bargain came the engine that needs some work and a kitchen missing a few components. The group painted it green and white, putting on three coats, and are using water from the building next door, Busytown Bikes. That limits them to a season that has to end in November, when Busytown Bikes’ co-owner Dominic Giampaolo will have to shut off the outside water.

As a donor to the New Roots operation, Giampaolo is a landlord vested in the Somali Bantu efforts to both grow and cook local foods. He said he’s been amazed by the quality of vegetables he’s gotten from New Roots.

“They are exceptional farmers,” he said. “They are phenomenal. I was getting produce so beautiful that I was like, ‘I don’t believe this. Did they really grow this?’ ”

He lives near the farm in Lewiston, and before the refugee farmers took it over last year, had seen the fields, formerly part of a fallow dairy farm, as “essentially useless.” But the New Roots farmers turned it into a spectacularly productive field. “I went out and ran through the field, and was like, ‘That is the broccoli that I bought. That is the chard that I bought.’ ”

He’s also a fan of the food truck.

“They make really good stuff,” he said. Even his less adventurous eater friends and family, enjoy it. His 10-year-old son asks for the “big pancake” (the injera bread) regularly.

“I want them to succeed,” Giampaolo said. “That is why I put money into the farm.” He’s looking forward to an earlier start for the truck in 2019 for a variety of reasons, including his own cravings for sambusa.

So is the Isuken crew, who are savoring their last weeks before winter and anticipating a busy season next year. Their customers so far have included a lot of white Mainers, peppering them with questions about the ingredients, what is and isn’t local, and what ingredients are halal (all of them). “They are really supportive of us,” Dekow said. But they could use more customers.

“Maybe next year we might be having a better chance than now,” Dekow said, looking around at the parking lot, chilly, damp and close to empty.

Isnino Ibrahim passes down a paper cartoon filled with sambusas, and the flavor of the place goes to technicolor.