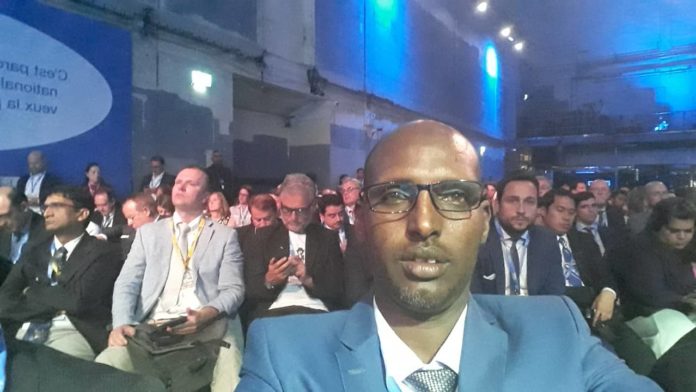 The Chair of Somaliland Journalists Association (SLOJA), Mr. Mohamud Abdi Jama aka Xuuto is currently in the UK by attending an international conference dubbed “Defend Media Freedom.” The conference which commenced in London yesterday saw the attendance of 1500 delegates from 100 countries. Six ministers, UN officials, Civil Society organizations, and diplomats from UK based embassies also participated the gathering. Ms. Harriet Baldwin, minister of state department for int’l development said that the UK has earmarked 15 million US dollars for media development.

Ms.Harriet Baldwi, further revealed that the UK spends 4 million US dollars in organizing the conference. She added that her country has allotted funds aimed at protecting media journalists. Canadian foreign secretary has also urged politicians to protect journalists and their well being. The media journalists and reporters across many countries have displayed the harassment that many practicing journalists have been inflicted upon in their home countries. They called on the UN and the EU to cut ties with those countries that have a bad record on the treatment of local journalists.

The attendees have took part heated debates and discussed on the constraints in regard to the media laws. Police, the Attorney Generals and the court systems were encouraged to put a lot of efforts in further probing the deaths of many journalists in many countries. This is the first time that SOLJA has attended such first overseas media conference.