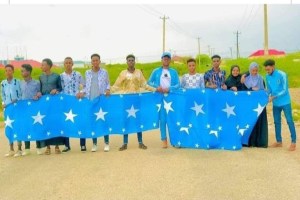 Somaliland Police have confirmed that at least 50 youth in Borama city are under arrest whilst some of them were dressed in attire made of the Somalia flag.

Reports indicate that the youths were recording videos of themselves in the vicinity of the city and designed to circulate social media before the police have arrived at the scene and put most of them behind bars.

SL police said in a statement that the youth were put into custody in various prisons across the country and will be tried before the court as soon as possible.

The police added they have conducted an investigation to apprehend people who are accused of organizing the youth.

Videos widely circulated in social media disclose police officers chasing female youth wearing an attire made of Somalia flag on the vicinity of the western city of Borama.

The provincial authority said SL youth have the right to exercise the freedom of speech and expression but security forces would not tolerate acts against SL sovereignty which may define the general public.

This coincides at a time when SL marked its 61st anniversary of independence from the UK in 1960.

Youths who showed up wearing the Somali flag attire were subjected to similar persecutions in Somaliland for the past years.