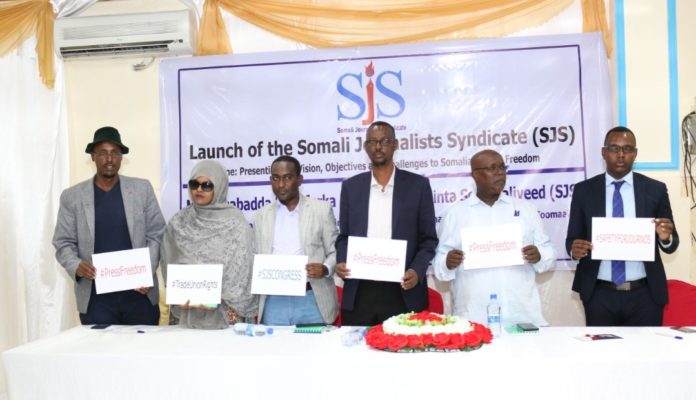 After extensive consultations with its members and wider network of journalists, Somali Journalists Syndicate (SJS) this week submitted legal comments and recommendations about the Somali Media Bill (amendment) to the ministry of information and the Federal Parliament’s Upper House (Senate) – where the media law is currently being reviewed.

As per SJS submission, 26 articles out of 40 articles made up of the Media Bill have been reviewed and commented by SJS’s legal advisers, senior journalists and editors. The articles mentioned are about the independence and the legality of the proposed Somali Media Council, proposed journalists’ registration by the government, imposing fines against editors and media managers/owners as well as mandatory multi-level registration and licensing of the private and independent media houses.

Sections of the bill with vaguely-worded articles and redundant definitions such as fake reporting, spreading false propaganda, violating the sound Somali culture and the Islamic religion, opposing national interest or national plan and national security were thoroughly reviewed, commented and suggestions were made with deliberations to right to Press Freedom, Freedom of Expression and Access to Information as constitutionally guaranteed rights.

“It is a one positive step that lawmakers have now recognized that the current Media Bill is repressive and draconian and therefore we are grateful to the Members of the Upper House for refusing this Bill to proceed and making sure that the voice of our journalists be heard and counted,” Abdalle Ahmed Mumin, the Secretary General of Somali Journalists Syndicate (SJS) said following the submission of the comments and recommendations.

“Our struggle towards unimpeded freedoms for the journalists and the media continues even as we have submitted our recommendations and comments to the Parliament and the Ministry of Information,” Secretary General Mr. Mumin adds “Somalia is not exempt from laying foundations of its laws in line with the international best practices and that is what we expect to see in regard to the Media Bill.”

Meanwhile, Somali Journalists Syndicate (SJS) commends Members of Somali Upper House for understanding the concerns of the journalists against the media bill.

The current Somali Media Bill was first assented into law on 10 January, 2016. In March 2017, then Minister of Information, Abdirahman Omar Osman (Yarisow) promised a fresh review before it was approved by the Cabinet of the Ministers on 13 July, 2017. The bill was, however sent to the Federal Parliament’s Lower House and passed on 08 July, 2019 without properly consulting media representatives and journalists.