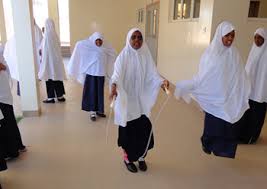 A single teacher is keeping classes going for 120 children at Gebagebo village school, in an extremely remote hilly area, some 90 km north of the Somaliland town of Burao.

Public vehicles venture only once a week up to this village, which is mourning the recent death of one of the teachers at the school, leaving Jamaa Hussein Jamaa to manage alone.

He teaches all the students across six levels by cramming classes in both mornings and afternoons, although the system is far from perfect.

The education ministry has not been able to find a replacement teacher willing to come to the village.

The school, built by the community in 2010, has just two classrooms. The school cannot offer grades seven and eight due to the lack of teachers and facilities. Fifty of the students are girls.

Jamaa receives his monthly salary of $100 from the ministry. Parents pay an additional 20,000 Somaliland shillings ($2) per pupil to support the family of the late teacher as well as water and cleaning services at the school.

Gebagebo village chief, Bile Jamaa Muse, told Radio Ergo that 3,000 families live in the locality. Among them are 100 families who arrived over the last two years after their livestock perished in successive droughts.

“The student population is growing and as leaders, we have forwarded the request for more teachers to the ministry of education of Somaliland,” he said. “We hope to get two more teachers this year.”

No new children are being enrolled due to the constraints. The students complain that the quality of their education is suffering because of the lack of teaching staff.

Hamse Nur Waarday, 14, is in standard six with three of his brothers. He said he is especially struggling with science as the time is so sort. Each lesson is 40 minutes.

Hamse comes from a low-income family, which owns 35 goats in the village.

“We don’t even have a chance for a break between lessons. We sit there for hours until the Duhur (midday prayer) is called. That is the time our lessons end,” said Hamse.

He says he does not have mathematics or Arabic lessons as the teacher cannot fit them in.

Gebagebo is located in the mountains of Guban and is hard to reach. Vehicles go up to the village just once a week – a journey that takes 10 hours with a high risk of breakdowns.

The education minister for the state of Togdheer, Mahamud Hassan Aynan, told Radio Ergo that four teachers had been despatched to Gebogebo school but all had refused to take up the post because of its remote location.

The ministry is now working on a plan to deploy a local person from the village to take up the teaching post.

“We are committed to finding teachers for the schools located in the north, which include the villages of Faqaayuub, Ceeldheer, Gebogebo, Kalbare and Booraamo. All these schools consist of just two rooms or classrooms,” the minister said. “We will deploy a teacher from the village of Gebogebo.”