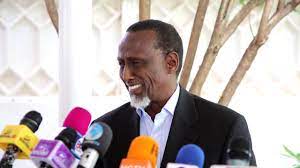 Somaliland prominent doctor and a politician has retired from medical profession as well as politics.

Dr. Mohmed Abdi Gabose has made the remarks in a press briefing on Sunday.

The doctor has said that he will consider charity activities, and worshipping dates.

He added that the country needs a fresh blood which will be able to implement the country’s future dreams.

Gabose said: ” I have finally decided that from now on, I will consider human charity activities, awareness of my children and worshipping dates while I am retiring from the medical profession.”

Gabose has been a medical practitioner for over 40 years and has become one of the most popular doctors in the region.

He served as interior minister to previous administrations in Somaliland.