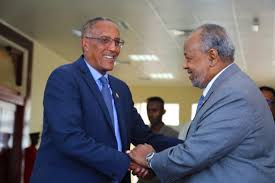 The President of the Republic of Somaliland H.E. Muse Bihi Abdi is expected to jet out to the Djibouti capital, for what the host, Djibouti, has described as a consultative meeting, also hosting an entourage from Mogadishu.

In essence, the meeting is in line with the resuscitation efforts of the stalled Somaliland-Somalia Talks which was last held on the 2nd of March, 2015.

The Head of State is expected to travel today, Sunday 14th June 2020, while leading a delegation of six officials to the consultative round table in Djibouti to meet Somalia president Abdillahi Farmajo and his delegates.

It is understood that the meeting to be facilitated by Djibouti has been convened by the US.

According to Djibouti Ministry of Foreign Affairs and International Cooperation a document stating the meeting to be held Sunday 14th (today) which is described as one of consultation, presented its complements to the EU Delegation in Djibouti, hence informing them that the country’s President H.E. Ismail Omar Guelleh would be chairing the summit.

It also notes that the Ethiopian Premier Abiy Ahmed has also been invited to the meeting.

Meanwhile the Waddani deputy Chairman Abdirazak Khalif Ahmed revealed in Hargeisa yesterday that the Head of State H.E. Muse Bihi called the members of the three official parties to a meeting held at the State House in haste to address the impromptu Djibouti one.

The politician affirmed the Presidential entourage of six is to depart to Djibouti for the meeting.

Apart from the President the delegation includes the speaker of the upper house of the parliament (the GUURTI) foreign, trade, livestock ministers and Lady Edna Adan.

He noted that the party recognized the state’s mandate to do negotiations on behalf of the republic.

He gave a re-cup of the subsequent talks held upto the time it stalled hence noted that the WADDANI Party gave the President and his entourage their blessing in their endeavors to negotiate on behalf of the nation and its people, as per the constitution laid and in line with the country’s aspirations.

He however noted that while the President informed them about the meeting hence sought their views, they were not availed with the immediate agenda of the meeting.

Abdirazak said that the President would thereafter inform the parties and the nation at large on the outcome of the summit. He said that the constitution gave the State the mandate to run its affairs.

The President has reiterated several times that the talks, once started, should have IC observers at hand as umpires or lenders of guidance as intermediaries.