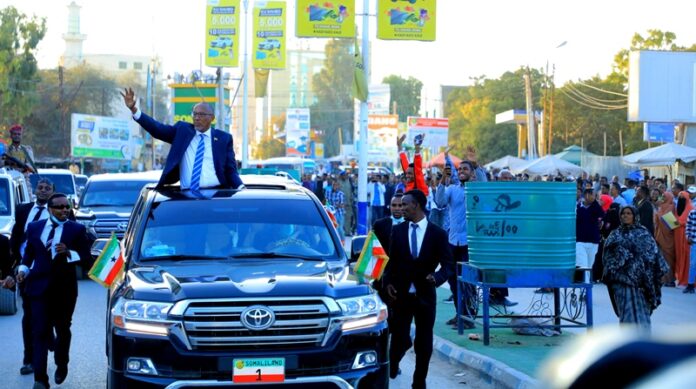 President Musa Bihi Abdi on Wednesday arrived home after wrapping up three day official working visit to Nairobi, Kenya’s capital where he met with Uhuru Kenyatta. Concluding the three day visit to Nairobi, Bihi talked about cooperation in trade, investment, education, peaceful coexistence and pacifying the Horn, as part of the agreement that the two countries have signed in a historic meeting that took place on Nairobi. President Musa Bihi’s trip to Kenya is the first high level visit from Somaliland in decades after ex-Somaliland President Dahir Rayale Kahin visited Kenya and met with former Kenyan president Mwia Kibaki. Prominent amongst whom he met during his visit include Kenyan President Uhuru Kenyatta and former Kenyan PM, Raila Odinga who is a staunch supporter of Somaliland’s case for statehood. Kenya has declared that it is planning to open consular office in Hargeisa to initiate diplomatic ties. Former Kenyan PM called on UN to initiate the divorce between Somalia and Somaliland.