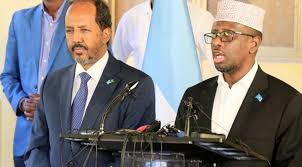 Somalia opposition parties have issued a statement in which they expressed grave concern over the increasing presence of non-AMISOM troops from the Ethiopian National Defense Force in several parts of Somalia.

In a statement jointly seen by opposition political parties led by Forum National Party under the former Somali president Sheikh Shariff Sheikh Ahmed says the unilateral action by non-AMISOM Ethiopian troops constitutes a blatant disregard for the longstanding agreement between the Federal Republic of Somalia and AMISOM troops contributing countries, which clearly defines the scope of their jurisdiction.

The opposition parties therefore considered all foreign troops who are not under the AMISOM mandate as occupiers.

Meanwhile, the parties condemned the downing of the Kenyan plane by the non-AMISOM Ethiopian troops in the Somali town of Bardale early this month, killing all those on board.

The opposition parties condoled the death of those killed in the tragic incident and sent their heartfelt condolences to their families.

The opposition parties have recently accused the federal government of using Ethiopian troops to intimidate officials in Gedo into renouncing Madobe while Ethiopia denied the accusation.

The parties said though Ethiopian troops flashed out Alshabab militants within the capital Mogadishu in 2007/08, they killed dozens of civilians, displaced millions across the country and caused widespread destruction.

They warned repeat of that horrendous mistake would undermine peace and security in the country. It would also further embolden extremist elements.

On the other side, the opposition parties also accused the chairperson of the African Union Commission for Somalia, Ambassador Madeira of overseeing unchecked violation of Somalia’s sovereign integrity and closely working with FGS. They said, Madeira worked in collusion with Ethiopian troops to interfere with Southwest and Jubbaland elections in the past. They added, Madeira is supposed to ensure AMISOM integrity is not tainted by ambitions of foreign state.

They asked both Somalia parliaments, The African Union and the UN Security Council to intervene, investigate the presence of Ethiopian troops in the country and to avert the building tension.

Also, they called The African Union Commission leader Mousa Faki with immediate effect to replace his special representative Madeira, with a neutral and experienced diplomat who discharges his duties faithfully.

Finally, they called on the Somali people around the country to strengthen their internal cohesion and resist their illegal interference from external forces particularly Ethiopian troops which they said have a long and checked history of destabilizing the country for fear of seeing a united, peaceful, strong and democratic Somalia.