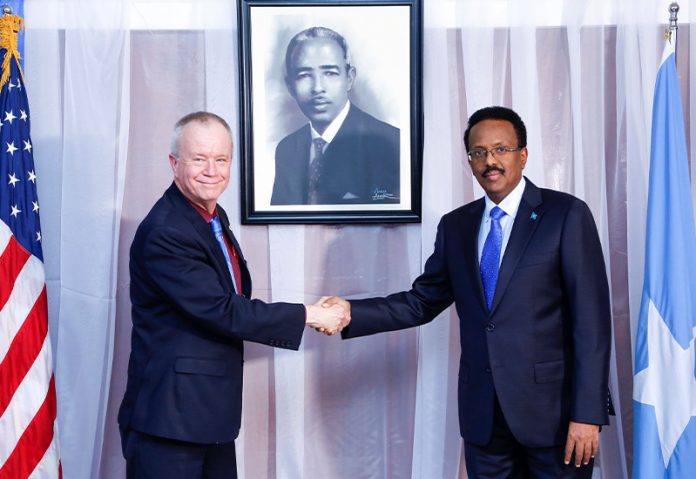 New US ambassador to Somalia Larry André presented his credentials to Somalia’s President Mohamed Abdullahi Farmajo whose constitutional term expired a year ago, months after he had been nominated by President Joe Biden, US embassy in Mogadishu said on Tuesday.

Images distributed by the communications office of Somali presidency, Villa Somalia, show André shaking hands with Farmajo after delivering his diplomatic credentials at a ceremony held at the presidential compound in Mogadishu.

Somali President Mohamed Abdullahi Farmajo “has today accepted the Credentials” from the new US ambassador and “congratulated” him while also “assuring him unequivocal support” towards strengthening of bilateral ties, Villa Somalia said.

US embassy in Mogadishu said that ambassador André promised to closely work with Somali authorities on shared objectives.

“Yesterday Ambassador André presented his credentials to H.E. President Mohamed Abdullahi Mohamed. After the ceremony, the two discussed the urgent need to conclude credible, transparent, and inclusive elections,” US embassy in Mogadishu tweeted.

“Ambassador André affirmed his commitment to working in partnership with the Somali people and their federal and state governments to advance our shared objective of Somalia’s revival as a secure, prosperous, and democratic nation.”