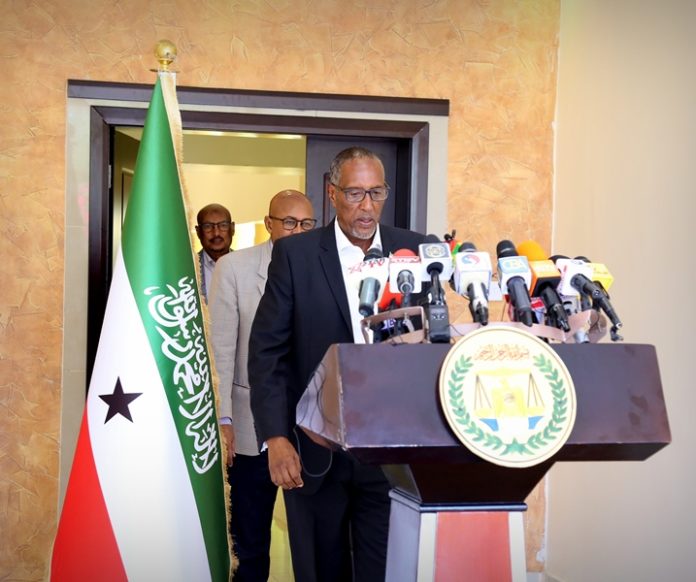 Re: Protecting Free Speech and Journalism and Ending Violence Against Journalists

I write on behalf of the New York City Bar Association to express deep concern regarding the state of media freedom in Somaliland. The New York City Bar Association urges the government of Somaliland to protect free speech and journalism and to end all violence against journalists. We call on the Somaliland government to cease unwarranted arrests and detention of journalists, attacks on journalists, and the arbitrary blocking of independent websites and shuttering of media stations.

The New York City Bar Association is an independent, non-governmental organization with more than 24,000 members. These members include lawyers, judges, law professors, and government officials from the United States and over 50 countries. Founded in 1870, the Association has a long history of dedication to promoting human rights and the rule of law. The Committee on African Affairs closely monitors, reports on, and responds to legal developments in Africa. The International Human Rights Committee investigates and reports on human rights conditions around the world. In addition, the Association’s Cyrus R. Vance Center for International Justice advances global justice by engaging lawyers across borders to support civil society and international human rights bodies.[1]

We take no position on Somaliland’s independence, but we note that Somaliland’s efforts to achieve recognition as a sovereign nation[2] have been supported by positive press reports lauding its stability and peacefulness,[3] and acknowledging that it “has had several contested elections and peaceful transfers of power since independence.”[4] The oppressive treatment of journalists and the media by both Somalia and Somaliland can lead outsiders to fail to distinguish between the two countries, and diminishes Somaliland’s international reputation.[5]

According to data compiled by the Somali Journalists Syndicate (SJS), Somaliland arrested 18 journalists in 2019.[6] Some of these arrests have involved violence. In May 2019, police reportedly shot and injured a TV journalist, Abdirahman Keyse Tungub, and then held him for several days, incommunicado, before releasing him without charges.[7] The journalist had been reporting on the arrest of a Parliament member. Authorities claimed that the journalist was arrested for “making anti-national propaganda, spreading false news, and…[disobeying]…a police order not to record interviews.”[8] In November 2019, police, together with employees of a private company, reportedly “assaulted and beat up” two journalists covering a protest by local traders against the company. The journalists’ cameras were confiscated, then returned after footage of the protest was deleted from the memory cards.[9] In a third incident, a police officer fired live bullets at journalists from different TV stations who were covering the opening of a new playground, and arrested them on grounds that they had obstructed the police. The journalists were given jail sentences but then released after paying cash to the court.[10]

Other journalists reportedly have been arrested for insulting public officials, disrupting government work, and spreading propaganda in connection with Facebook posts criticizing the National Intelligence and Security Agency for its treatment of detainees,[11] as well as for investigating allegations that a government-initiated employment campaign was marred by corruption.[12] In July 2019, a regional court handed journalist Abdimalik Muse Oldon a jail term of three and one-half years on charges of defamation for claiming a school taught sex education, spreading what were claimed to be false allegations against Somaliland and calling the Somaliland government a dictatorship on Facebook.[13] His sentence was upheld by the High Court in September 2019, and, as of this letter’s date, he remains in prison.[14] As Laetitia Bader, senior Africa researcher at Human Rights Watch observes, “Public space for criticism of the government on contentious issues is shrinking in Somaliland, as the authorities bring criminal charges to silence critics. This heavy-handed response is an assault on key human rights protections, and risks badly tarnishing the government’s image.”[15]

In addition to arbitrary arrests of journalists, Human Rights Watch notes that there have also been a significant number of closures of media outlets by Somaliland officials.[16] In November 2019, Abdikadir Saleban Asayr, editor-in-chief of Horn Cable TV was arrested and imprisoned after interviewing a separatist leader and reporting on a leaked letter regarding a safety concern at Egal International Airport. The TV station was shut down until the court rejected the police action against the station as illegal. The editor, however, remained imprisoned until January 2020.[17] In February 2019, the court suspended the Foore newspaper and fined its editor for reporting on a new presidential palace being built in the capital.[18] In September 2019, police arrested two journalists and blocked the HadhwanaagNews website following a report alleging corruption by the governor of Somaliland’s central bank.[19] The Committee to Protect Journalists (CPJ) called for the immediate release of the journalists and the unblocking of the website. “Journalists should be allowed to cover allegations of corruption without intimidation,” CPJ representative Muthoki Mumo said.[20]

Reports of intimidation and imprisonment of journalists continue in 2020. CPJ reports that in January of this year, Somaliland authorities imprisoned a journalist for posting comments on his professional Facebook page, which were deemed to be critical of a government official.[21] He was sentenced to twenty-one months in prison following a trial in which he had no lawyer. Neither CPJ nor other journalists could determine the charge against Abdirahman.[22] Most recently, Somaliland’s Vice President, Abrdirahman Abdullahi Seylicu, has warned that any journalist who reports on coronavirus cases before the government has officially confirmed them will be deemed a “national criminal.”[23]

Somaliland’s repression of free speech conflicts with the intention of the Somaliland Constitution to protect freedom of expression under Article 32(1) which states: “Every citizen shall have the freedom, in accordance with the law, to express his opinions orally, visually, artistically or in writing or in any other way.”[24]  It further conflicts with the Constitution’s guarantee under Article 32(2) of a free press and media: “The press and other media are part of the fundamental freedoms of expression and are independent.  All acts to subjugate them are prohibited, and a law shall determine their regulation.”[25]

It has been observed that Somaliland’s penal code (drafted in 1964) contains “a number of vaguely defined and very broad criminal offences” that run contrary to the freedoms of expression and press guaranteed by the 2001 Constitution.[26] These offenses include, for example, “offending the honour and prestige of the head of state, insulting a public officer or institution, or contempt against the nation, state or flag,” all of which carry a potential three-year sentence. Reform of the penal code is necessary to protect the freedoms guaranteed by Somaliland’s Constitution.[27]

Furthermore, Somaliland, through its Constitution, has promised that it “shall act in conformity with the United Nations Charter and with international law, and shall respect the Universal Declaration of Human Rights.”[28] Somaliland’s actions against the media do not align with the principles embedded in these international instruments, including respect for human rights and fundamental freedoms,”[29] or, notably, the Universal Declaration’s express protection of the right to freedom of expression.[30] The Constitution further provides that the fundamental rights and freedoms granted under it “shall be interpreted in a manner consistent with the international conventions on human rights,”[31] which would include, among others, the International Covenant on Civil and Political Rights and its protections of freedom of expression and the right to liberty and security of person, including freedom from arbitrary arrest or detention.[32] The freedom to express viewpoints critical of the government, and to report on subjects such as possible government corruption are important aspects of free speech and a free press that ensure a government’s accountability to its citizens.

The New York City Bar Association urges the government to fulfill its constitutional and international obligations by ending its unwarranted arrests and detention of journalists, its attacks on journalists, and its arbitrary media closures. Somaliland should immediately release all journalists who have either not been charged with a crime or who have been charged only with crimes such as allegedly making “insulting” or “false” statements. Somaliland authorities should immediately cease harassing journalists for reports that allege government corruption, and instead use its resources to thoroughly investigate the alleged corruption and report its findings, while allowing journalists to review any investigations and their results. Lawmakers should reform the penal code to decriminalize free expression of political opinions, and ensure that the code conforms with the protections guaranteed by Somaliland’s Constitution.

By undertaking the above measures, the Somaliland government can promote free speech, a free press and the personal safety of all its citizens. Freedom of expression and freedom of the press are essential to protect Somaliland’s democracy and the rule of law, and to build on its reputation as a free, independent state.

[26] See Somaliland: Detained critics must be released, Amnesty International, June 27, 2019, https://www.amnesty.org/en/documents/afr52/0615/2019/en/; Somaliland: Escalating censorship, harassment and prosecution of government critics, Amnesty International, July 4, 2019, https://www.amnesty.org/en/latest/news/2019/07/somaliland-escalating-censorship-harassment-and-prosecution-of-government-critics/. See also Discussion Paper on Reform of the Somaliland Penal Code, Horizon Institute, Dec. 2014, https://www.thehorizoninstitute.org/usr/library/documents/legal-commentaries/discussion-paper-on-reform-of-the-penal-code.pdf (noting at page 9 that “[t]he unrestricted wording of the offenses [created by the Penal Code], the criminalization of certain types of expression, and the risk of executive abuse are all serious concerns, with implication for the right to freedom of expression as provided in Article 32 of the Constitution, and international human rights law”).

[27] See Horizon Institute, supra note 26, at 25. Horizon Institute recommends repeal of the laws criminalizing insults to public officials. It cites the U.N. Human Rights Committee General Comment No. 34 (102nd Session, Geneva, July 29, 2011): “States parties should consider the decriminalization of defamation and, in any case, the application of the criminal law should only be countenanced in the most serious of cases and imprisonment is never an appropriate penalty.” Human Rights Watch continued the call for penal reform in 2018, when it reported on similar abuses that year, and urged Parliament to repeal “all laws that criminalize the free expression of political opinions, including criticism of state authorities or national symbols.” Somaliland: Prosecutions Threaten Free Expression, Human Rights Watch, May 8, 2018, https://www.hrw.org/news/2018/05/08/somaliland-prosecutions-threaten-free-expression (citing the arrests of Boqor Osman Aw-Mohamud after he called for the withdrawal of Somaliland and Puntland troops from an inauguration event, Naima Ahmed Ibrahim for promoting Somaliland-Somalia unity, and Mohamed Kayse Mohamud for calling President Bihi  a “local” rather than “national” president).