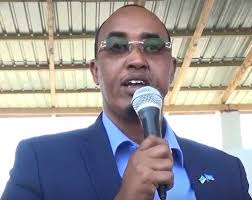 The weak SFG has arrested Jubaland minister in charge for security, Mr. Abdirashid Hasan Nur a.k.a. Janan at Mogadishu airport on Saturday.

The security minister for Jubaland left from Doolow of Gedo region and was heading to Addis Ababa, the Ethiopian capital.

He was due to catch an Ethiopian flight from Mogadishu to Addis Ababa before he was detained at the airport.

The SFG order to compel all flights heading to Kismayo must make stopover at Mogadishu airport has forced the security minister to come to Mogadishu.

The minister is accused of committing human rights violations in Gedo region whilst Somalia’s Attorney General has not filed the allegations against the security minister.

The arrest would further worsen the deteriorating ties between Jubaland and SFG.