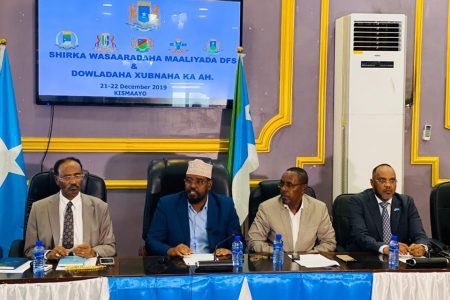 Jubaland State leader Ahmed Mohamed Islam alias Ahmed Madobe has hosted a meeting on Somalia’s Financial Issues in Kismayo, the port city which is the administration seat of Jubaland on Saturday.

The meeting saw the attendance by the Federal Gov’t and regional authorities in Somalia.

They discussed on the financial reforms of Somalia and ways to improve the management of finance of member states.

This is the first meeting brought together by officials from the Federal Gov’t and regional states which have locked horns.

The SFG had a fallout with Jubaland and Puntland.

The Meeting which was organized by the finance minister of Somalia;s Federal Gov’t while Ahmed Madobe, Jubaland leader has arranged for the venue.

The FM, Baileh has encouraged the populace in Jubaland to exploit from the God-given natural resources and initiate development projects for the public.

The meeting coincided at a time when the Federal Gov’t of Somalia and Jubaland had disagreed over the re-election of Ahmed Madobe as Jubaland state president for his second term in September, 2019.

The meeting in the port city of Kismayo , the attendees agreed to further continue with the collective duty and diligent task to consolidate Somalia’s economy via the success, reforms and the implementation of policies and process to support it.

The Federal Gov’t of Somalia refused to recognize the election of Ahmed Madobe as Jubaland leader.

The SFG traded accusations that Kenya played a huge role in his re-election of Ahmed Madobe as the controversial leader of Jubaland saying it as illegitimate.