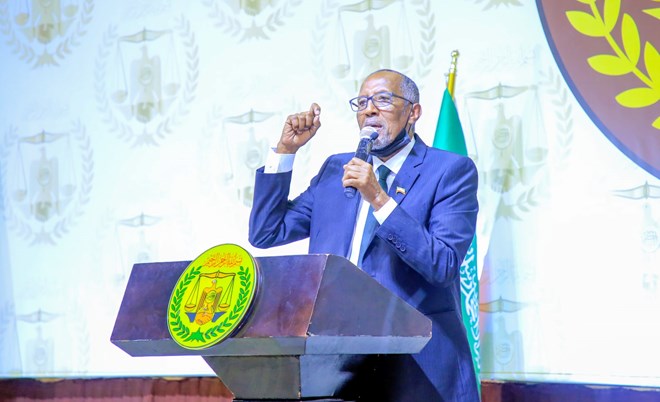 Defamation is a “false statement presented as a fact that causes injury or damage to the character of the person it is about.’ “Lately, the so-called Somaliland Committee for the Promotion of Virtues and the Prevention of Vice (SCPVPV) and their surrogates have been slandering Abaarso School, “Barwaaqo” University and the Hargeisa Cultural Center (HCC). They are accusing those institutions of spreading evangelism and other cultures and lifestyle alien to our students and society, including homosexuality.

The face of this relentless slander against Abaarso School and HCC is Mr. Coldoon, a Somalia apologist and al-shabaab minion, living in the dusty town of Burao—where the prospect for jobs is bleak.

Coldoon and the religious zealots backing him are spreading lies with reckless disregard to the safety of the students, teachers, administrators, and parents of Abaarso School and “Barwaaqo” University, and the founder of Hargeisa Cultural Center, Mr. Jama Musse Jama, who contributed so much to fighting illiteracy in Somaliland. They are claiming to defend the mores and morals of the community when they are repeatedly propagating false accusations, which is un-Islamic, to harm the dignity and the reputation of fine people and stability of Somaliland.

Defaming other people also sows division and discord among community, neighbors, and even friends.

In Islam, “backbiting and slandering are shame and disgrace.” Allah forbids these acts, as He says in the Holy Quran:  “Oh you who believe! Avoid much suspicion, in deeds some suspicions are sins. And spy not neither backbite one another. Would one of you like to eat the flesh of his dead brother? You would hate it (so hate backbiting). And fear Allah, verily, Allah is the One who accepts repentance, Most Merciful” (Quran 49: 12).

In the digital age fake news spreads like wildfire in Facebook and other venues. Any determined group can post online misinformation, fake news can go viral and false information becomes the “truth” for many, especially those who are illiterate or low-information citizens.

The so-called media in Somaliland usually promulgates Propaganda for money and have become so corrupt. They also become conduits for the slander and defamation against Abaarso School, “Barwaaqo” University and the HCC, especially Bulsho YoutubeTV.

However, the defamation of Abaarso school and the HCC can be proven in a court of law.

But why is the wheel of justice of Somaliland so slow in the case against Coldoon from students and parents of Abaarso School?

We must hold Coldoon and the self-righteous Imams accountable in the court of the law.

But what is their motive of the religious zealots or individuals to defame Abaarso School, “Barwaaqo” University and the HCC?  In the case of Mr. Coldoon, it might be a release valve for his failure, anger, misgivings, and jealousy. Coldoon tried everything to become a relevant person, including becoming acolytes for Farmaajo. When that did not work, he tried to become an agent for Qatar Intelligence services under the cover of Al-Jazeera media. Again, he failed.

Finally, he went back to the town he was born, Burao—to join SCPVPV Burao chapter—which is the most powerful and violent one in the nation.

However, the agenda of the emboldened religious militant groups is larger than slandering and defaming our educational institutions or cultural centers: They have people all over Somaliland towns, villages, businesses, Wadani Party, and even the new legislature. They do not believe our constitution; they hate our system of government, our flag, and our country. They’re very determined to bring down Somaliland and takeover our government under the guise of protecting Islam unless we become vigilant and protect our hard-fought freedom.

President Egal and Royale fought hard against extreme elements taking hold in Somaliland. But This group and other al-Shabaab sympathizers became so powerful in 2012 when Kulmiye party led by East Burco Mafia took over Somaliland government, and then they joined the administration ranks, including cabinet, other senior positions, and the police.

For example, in Burao, with the aiding and abetting of the local government, they banned from local hotels, restaurants and shopping places, events where gender were not separated. They also banned music and even Somaliland national anthem from all venues.

It is prudent for President Bihi to reform the corrupt Ministry of Interior and Somaliland police force, and to do a complete thorough investigation into how a fanatic religious committee and the Ministry of Religious Affairs intertwined.

There are reports that the Ministry of Religious Affairs are investigating fake news from the militant group and Somaliland haters accusing the Chancellor of “Barwaaqo” university, Joy Oghogho Isa, doing evangelical work in Somaliland. Joy Isa has been running that institution for 3 years. Somaliland government representatives have visited the Abaarso Schools many times. Why were complaints never raised if Joy promoted evangelism among the students?

According to a press release from Abaarso school’s administrator stated that the school welcomes the investigation of Ministries of Religion and Education.

There must be accountability; we cannot compromise national security matters. If the Interior Ministry fails to shut down this brazen militant group and other Al-shabaab supporters—many people would assume that they are a state- sanctioned organization.

The militant group  receives funding and guidance from the Ministry of Religious affairs. More troubling, there are also credible allegations that it received funding from foreign entities as well as businesses, mainly predators from Telecommunication/Money transfer sector—which still finance through racketeering money remnants of the Islamic Courts and al-Shabaab.

The predatory elite from the Telecommunication/Money transfer sector benefits from the status quo (weak or no government), which is to not pay any taxes or invest in social programs to help the poor and fight the abject poverty.

If President Bihi fails to put a STOP to the RISE of the religious militant groups in Somaliland, al-Shabaab syndicates will take over Somaliland—-right out of our hands very soon, patriots. A risky scenario is that we could lose our hard-fought freedom if we fail to protect it NOW.