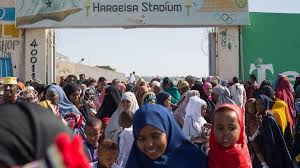 Here’s a short break from some of this week’s (and possibly….year’s) doom and gloom: on Wednesday, the New York Times wrote a lovely piece about a 10-kilometer race in Somaliland that’s become popular with women, despite extreme gender disparity in the region.

Somaliland, a self-declared state in northwestern Somalia, has a significant gender gap (not to mention a long history of female genital mutilation), with a 2019 study finding women were “comprehensively disadvantaged compared to men in terms of economics, politics and education.” Women have “less than half the opportunities afforded to men,” the study concluded; they were twice as likely as men to be out of work, they were twice as likely to receive little to no education, and they were much less likely than men to end up in a leadership or political position.

There is, however, the aforementioned 10-kilometer race, which is part of a larger annual education fundraiser conference in Hargeisa, Somaliland’s capital. The race has been attracting some women runners over the years, which the Times says is a noteworthy sign that the gender gap is closing ever so slightly:

So, while Americans are stuck in our homes waiting (and waiting, and waiting) for an opportunity to move freely, it’s nice to remember that things are still moving out in the world.