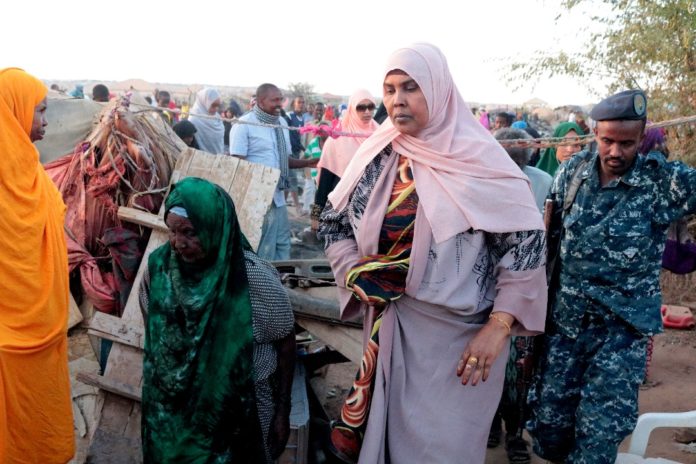 Seventy families have been forced to spend cold nights out in the open after their shelters in an internal displacement (IDP) camp in Hargeisa were destroyed by fire.

The fire on 2 April burnt the whole of Nasahablod B camp, as strong winds fanned the flames.

Fire engines could not reach the scene as access roads to the camp were blocked by the encroachment of settlements.

Nadifo Samatar says her sister, who was sleeping when the fire broke out, died in the incident. They found her body in the morning.

“I am so desperate. I lost my sister and everything I had. The incident has had a huge impact on me and the scene of that fateful night keeps playing out in my mind,” Nadifo said.

Families also reported the death of a second woman but there were no clear details available.

Nadifo has been sleeping on cardboard spread on the ground.

She received a little food from neighbours but has nothing else. Her son and his seven children, who were living with her, went to stay with a relative in town.

“I have nothing to eat, no water, no clothes. It is very cold at night and I spend my nights in this open place because I have nowhere else to go,” she stated.

According to the IDPs, the owners of the land where the camp is situated had asked them to vacate the area several times but they refused saying they had nowhere to go.

“I would have shifted from that place if I had some money. I have no courage to stay where my sister lost her life,” said Nadifo, who lived in Nasahablod B camp for the last nine years.

Halima Madar Abdullahi, another resident of the camp, says she has not slept for the last 20 days fearing for the safety of her four children.

“I keep guard the whole night for fear of people or wild animals. We spend our nights in this open space with no security fence,” she said.

Halima said she had no food for her children. They have not gone to school since the fire as all their school items were burnt.IDPs are having to spend 0.25 dollars to buy a jerry can of water from nearby boreholes

Mohamud Yussuf Ali, the director of Somaliland Displacement and Refugee Agency, told Radio Ergo the authorities were investigating the cause of the fire. He said they planned to relocate the families within 30 days.

“There are ongoing plans to support these families and the agency is doing its best. They will be moved to another place,” he said.