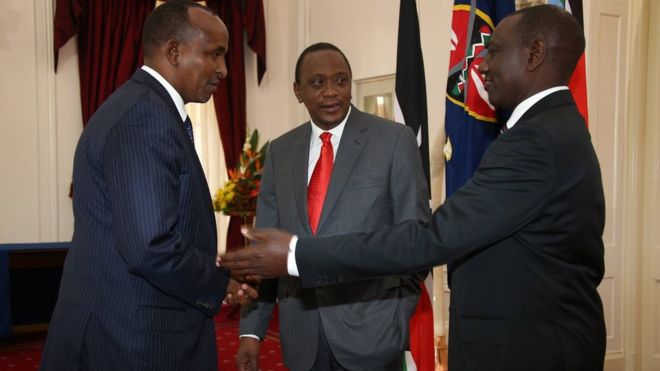 The Majority leader of Kenya National Assembly, Hon. Aden Bare Du’ale has made his stance on the maritime border row between Kenya and Somalia. The Kenyan parliamentary leader is elected from Garissa district is thought to be the third most powerful politician in Kenya besides President Uhuru and Deputy President William Ruto. He is the leader of the members of Kenya house of assembly particularly the ruling Jubilee party and is close ally to the president and his VP. Many people have questioned on the stance that Aden Bare has taken in regard to the maritime dispute that erupted between the two neighboring countries. In an interview with BBC Somali world services, he told that he shares the stance of Somalia gov on the maritime row. He told that he is Somali by nationality but is also holding Kenyan nationality. He added that he is part of the Kenyan gov. He said that his position is that he will not allow the territorial waters of Kenya will not be taken by Somalia or Tanzania. In addition, he called that the dispute should be resolved by diplomatic and peaceful manner. He also stated that it is not the right way to take the matter to court for resolving the row. He urged that since both Somalia and Kenya share deep ties between the governments and the people, then the row should be amicably brought to an end. Mr. Aden has said that he is doing all he can to put the row to rest and added that president Kenyatta is ready to settle with Somalia’s counterpart the issue by peaceful means. The maritime dispute that two countries have locked horns went from bad to worse in recent days.