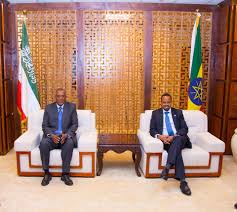 A high powered Ethiopian diplomats headed up by the Federal Minister of Finance, Ahmed Shide have arrived in Hargeisa, the administrative capital of Somaliland.

The Ethiopian delegation is expected to hold talks with Somaliland President to discuss a wide range of paramount mutual concerns between Ethiopia & Somaliland.

This visit to Somaliland paid by the Ethiopian senior diplomats coincidentally comes barely a week after Egyptian high level delegation paid a visit to Somaliland and held bilateral meetings with Somaliland officials from the foreign, investment, fisheries and livestock ministries.

Ethiopia & Egypt have locked horns for the consumption of Nile River Water in which Ethiopia is building Mega dam, the largest of its kind in Africa.

The two countries have partnered with the UAE state owned DPW company to invest Somaliland’s port of Berbera which plays a huge role in maritime links in the East Africa and the Middle East countries. 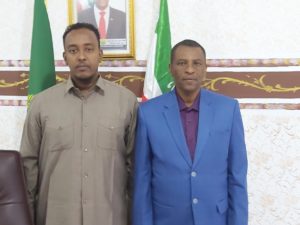 General Mekanon, Ethiopia’s military attache at the General Consulate in Hargeisa with Somaliland’s defense minister, Abdikani Ateye, during a meeting.

It is believed that Ethiopia begun to suspect once its biggest foe, Egypt has dispatched a high level delegation to Somaliland and expressed its keenness to set up a military base in Lugyaha, a coastal city in Somaliland.