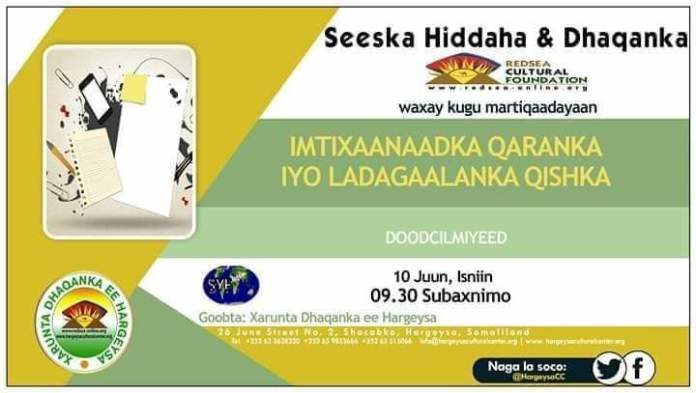 Hargeisa–The ministry of education & science has dismissed a debate that Hargeisa Cultural center is about to organize and hold national exams. The center has dubbed the debate as national exams and the fight against cheating and further posted announcements of the date and venue of the debate. The Cultural center has urged the public at large to attend and it urged the parents presence will be highly appreciated. The office of Somaliland examination board dismissed the debate and the center that is organizing the event. Mr. Daud Ahmed Farah, the chairman of the examination board has refuted the debate and the organization that is preparing to host the event. He has also repudiated that the officials at Hargeisa Cultural Center has not given a call in order to inform about the national debate which will transpire in Hargeisa. The chair stated that this is the sole responsibility of the examination board to organize such debates which will be of great importance to the public. He strongly said that the office of the examination board won’t accept that other organizations would undermine their duty. Once the chair of the examination board rejected debate to go ahead, then Hargeisa Cultural Center has shortly announced the cancellation of the debate which will be vital for the public to raise awareness of this crucial issue. The center has not given an apology to the ministry of education and science. The national exams for high and elementary schools will commence on the 15th of June, 2019.