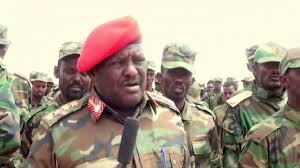 The Somaliland government has set new conditions of fulfilling the brokered peace deal with the former SL member of defense forces, Colonel Said Aare. The traditional elders who are engaged in ending the disagreement between Somaliland gov and the rebel group led by the defected army Colonel Aare have been resolved. The gov demands that the renegade Colonel Aare must request the presidential amnesty while he is in exile. The defected Colonel, Aare has rejected gov demands. Sanaag regional governor, Mr. Timbarow is lending hand to the elders who are involved in ending the lingering dispute between the rebels led by Aare and the gov of Somaliland. The rebels groups based in the vicinity of Erigavo has become a security challenge for the incumbent administration headed by president Bihi.