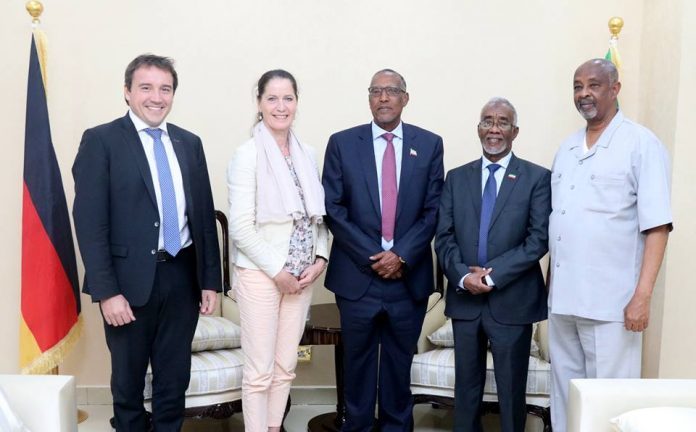 Germany has offered to work closely with Somaliland to help develop certain technical and social aspects of the Horn of Africa nation.

German Ambassador to Kenya, Somalia, and Seychelles, Annett Gunther, was in Somaliland on Monday for a working visit where she held talks with President of the Republic of Somaliland, Musa Bihi Abdi.

The discussions also covered a possible boost to the already substantial development cooperation between Somaliland and Germany and the support the latter contributes to on-going development programmes.

As German support already covers roads and completion of an adequate water system for Hargeisa, the capital, contribution to the Somaliland education and fishery sectors was also raised.

In Nairobi, Somaliland envoy to Kenya Omar Bashe continued his charm offensive as he paid a courtesy call to the Austria ambassadors to the Kenya Christian Fellner.

Bashed and Felner discussed on various issues on how the Austrian and Somaliland government can strengthen their partnership on areas of mutual interest.

“It was a great meeting. Austria and indeed other European countries have shown interest in working with the government of Somaliland which is a sign of great things to come for our country,” Bashe said.

Bashed added: “Ours is to engage in partnerships that will improve the lives of our people,”

Somaliland which separated from Somalia after the civil war of 1990 has been pushing for international recognition.

Recent interest from the international community has boosted the country’s push for autonomy.

A week ago, a delegation comprising the EU, Denmark, Norway, the United Kingdom, Sweden, Switzerland and Finland concluded a high profile, three-day visit to the country.