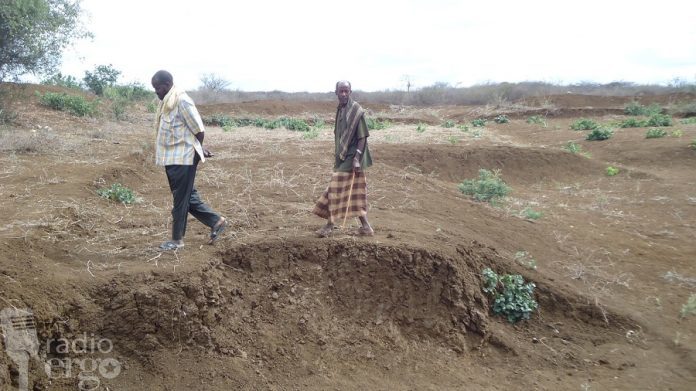 Dozens of farms in Somaliland’s Awdal region have been invaded by locusts, leaving farmers wondering how they will recoup their losses.

Suleiman Hassan Said, the chairperson of Halimale farmers association, said his 27 hectare farm had been stripped clean by the swarm of locusts that arrived in the area last month.

“There is nothing to stop the locusts in their early stage. It is sometimes possible to minimise the destruction but this one cannot even be scared away by beating tins,” said Suleman, who confirmed that 20 farms in his village had been affected.

Suleiman and other farmers had been expecting to harvest in October. They now face huge losses.

“I was expecting to get something like $4,000 from the watermelons alone. I have been working on the farm for three consecutive months and invested a lot of money!” he complained.

Another farmer in Halimale saw the locusts swarming in and felt a foreboding of difficult times ahead.

“By the time the swarm of locusts was passing over my head, it was like I was under a shade, I could not see the sun,” he said.

“You can guess that when the crops are harvested, people benefit from them in different ways. Some use the maize stalks to feed to cattle and camels, and the people use the food for six months, but now it is difficult to get any harvest,” he said.

Abdi Suldan from the same village set fire to old tyres on his farm to try to ward off the swarming locusts.

“The invasion by the locusts began on 12th September. They destroyed the only one hectare I had planted. When we started burning tyres on the farm it was already too late because they had left nothing behind,” he said.