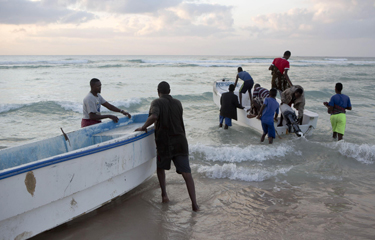 The Food and Agriculture Organization has delivered 12 longline fishing vessels to the Ministry of Fisheries and Marine Resources in Somalia’s northern autonomous State of Puntland.

The vessels were transferred under the European Union’s financed Coastal Communities Against Piracy (CCAP) program, designed to support the Horn of Africa country’s ongoing fisheries and aquaculture sector reforms.

The CCAP is one of several projects intended to woo more young people and small-scale fishers away from piracy by providing them an alternative source of income through revival of the country’s commercial fishing industry. The CCAP is also building capacity among the state’s fishers through training that focuses  value-chain activities such as boat-building and seafood product handling, processing, and marketing.

“The vessels are another contribution from the Coastal Communities Against Piracy (CCAP) Project, generously funded by the European Union, which works to develop a vibrant fisheries sector that harnesses the great potential offered by Somalia’s coastline by providing decent employment opportunities young people along the fisheries value chain,” FAO CCAP Project Manager in Somalia John Purvis said.

Somalia’s coastline has been synonymous with illegal fishing, frequent piracy, and a thriving chaotic maritime system, though the problem has abated somewhat since September 2012, when the country held indirect presidential elections and a government formed in an attempt to end the more than 20 years of civil war.

FAO said the 12 vessels were deliberately designed to be of the longline fishing model that is more sustainable. Fishers can now more easily catch fish, maintain their quality, and gain value for their catch with their effective deployment, it said.

Last year, the Federal Government of Somalia (South Somalia) issued offshore fishing licenses for the exploitation of tuna and tuna-like species, a move made as part of the country’s drive to encourage investments into its fishing industry. Somalia’s fisheries remain underexploited despite Somalia having the longest coastline along the Indian Ocean, primarily due to their inaccessibility and the threat of piracy.

The offshore fishing licensing bid attracted the interest of Chinese Offshore Fishing Association, which is the only entity that submitted expression of interest for the advertised fishing venture, which is to be carried out beyond 24 nautical miles from Somalia’s coastline.