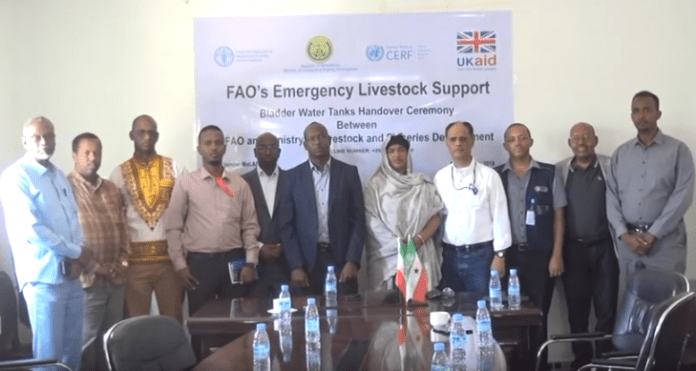 Food & Agriculture Organization of the United Nations (FAO) handed over 868 bladder water tanks to the ministry of livestock & Fisheries Development in a ceremony held yesterday. The bladder water tanks donated by FAO was intended to the nomadic communities which severe drought affected and are designed to store 10,000 litres water.

The FAO has become the first international agency that has immediately responded to growing calls from the government of Somaliland which appealed that the rural communities need urgent assistance in trucking water to the rural communities. The handing over ceremony saw the attenace of the deputy minister for livestock & fisheries development, Ms. Yurub Abib Abdi, the director general, FAO officers and other officials from the disaster preparedness agency. Ms. Yurub, the deputy minister promised to deliver the bladder water tanks to the communities designed to benefit from them in which the ministry registered.

The deputy minister further said that they report back to FAO once the distribution of the tanks is done. Mr. Mohamed who spoke on behalf of FAO stated that the objective behind the donation is to respond to drought alerts made by the government which appealed urgent help to be given to people who are desperately in need of drinking water after the impact of drought. The DG accepted the donation from FAO and thanked them for the pressing response.