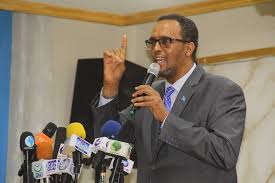 Somalia’s former deputy prime minister Mohamed Omar Arte has been granted a presidential pardon on Sunday after renouncing his views against Somaliland independence during a visit to Hargeisa.

In a statement issued by the Somaliland president Muse Bihi Abdi, it was officially announced that Arte was granted a pardon following consultations with traditional leaders and the attorney general.

The statement added that the president took the decision considering Arte’s move to renounce his views.

What is the motive behind former deputy PM’s move?

Mr Arte has recently arrived in Hargeisa, the capital of Somaliland, reportedly visiting his father who is ill in the city. Somaliland authorities do not usually allow members of the Somali federal government to live or travel inside its territory.

The former deputy prime minister was forced to renounce his political views, a condition that was standing to the way of visiting his father and president Bihi’s subsequent statement corroborated media reports that Arte had quitted federal parliament.

What political message could the move send?

For many, the move sends a political message that the federal government cannot rely on officials serving senior posts from Somaliland, who if they wish to return to break-away state would be forced to apply for presidential pardon, renouncing their political views.

The frequent announcements of pardons granted to federal government officials renouncing Somalia politics, showcase the de facto administration’s power to quell the influence of politicians against its separatist cause.

The defection of Mohamed Omar Arte is a major blow to the federal government and its claims that Somaliland is part of its territory. He is the son of Somalia’s former Prime Minister in 1991-1993 and FM, Omar Arte, a man who wielded greater political influence in the Horn of Africa nation before the collapse of Siad Barre’s military regime.