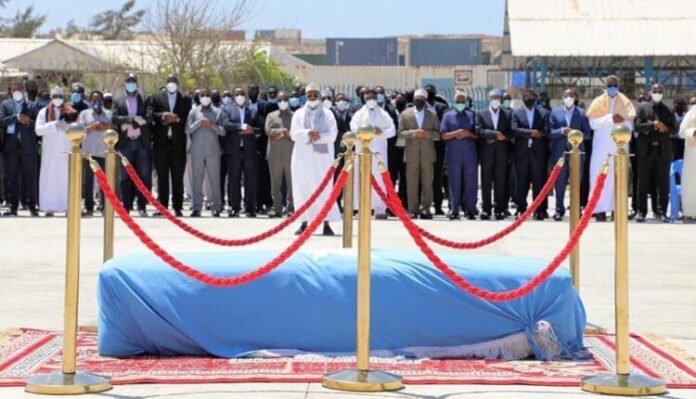 Somalia is officially in national mourning following the death of its 4th president Ali Mahdi who passed in Nairobi after having succumbed to Covid-19 pandemic.

Ali Mahdi, Somalia’s ex-president was laid to rest on Friday in a state funeral led by the outgoing president Farmajo and accompanied by PM Mohmed Hussein Roble.

The late body of Ali Mahdi was flown from Nairobi where he died while receiving treatment in a hospital after having contracted the novel coronavirus.

The funeral was attended by Farmajo, former Head of States, leaders of the opposition as well as government officials.

“President Mohamed Abdullahi Farmajo led the nation in giving a heroic State send off to our Late President H.E Ali Mahdi when he joined family, relatives and citizens for national funeral prayers in Mogadishu,” Villa Somalia said in a tweet.

The outgoing Somalia’s President Farmajo prayed for the late Mahdi to be in Allah’s mercy.

The Somali government declared that flags to be flown half mast during three days state mourning for the late ex-leader.