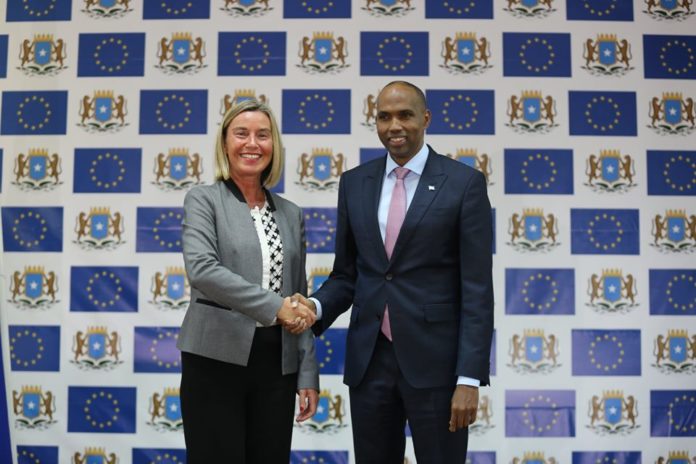 The European Union is renewing its support for peace in the Horn of African even as peacekeepers in Somalia struggle with reduced funding.

This was the message the EU High Representative for Foreign Affairs and Security Policy Federica Mogherini delivered in her round trip to Somalia, Kenya, Djibouti and Ethiopia.

These happen to be four out of the five troop-contributing countries to the African Union Mission in Somalia (Amisom), which is still grappling with the United Nations Security Council resolution for a phased drawdown.

It came at a time when the ongoing diplomatic rift between Kenya and Somalia over the marine boundary is threatening to derail the war against Al Shabaab.

“We have had discussions around regional peace and security matters as well as integration. We discussed co-operation in Somalia, South Sudan, Democratic Republic of Congo as well as my request for EU support for Kenya’s bid for the UNSC,” she said after meeting Kenya’s Cabinet Secretary for Foreign Affairs Dr Monica Juma.

In Somalia, Ms Mogherini described her visit as part of the EU’s friendship, partnership and support for President Mohamed Abdullahi Farmajo.

According to a release from the EU External Action, Ms Mogherini while in Somalia, visited the EU Training Mission, Somalia troops and EU Capacity Building Mission for Somalia personnel.

The EU remains one of the biggest Somalia donors. In 2017, the EU pledged that member states will invest $1.03 billion that will bring the total support to Somalia to $4.5 billion till 2020.

This includes the EU providing Amisom salaries s well as salaries for police, development aid and $596 million for humanitarian assistance alone, to tackle the devastating effects of the drought in Somalia.