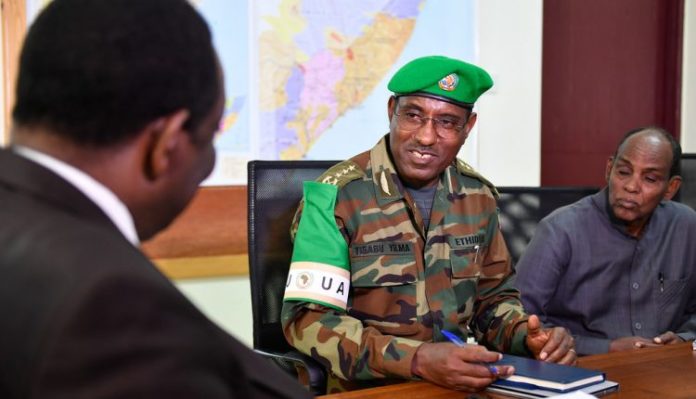 He took up office yesterday from Lieutenant General Jim Beesigye Owoyesigire, who has served in that capacity since January 2018, a according to a press release issued by AMISOM.

Lt. Gen. Tigabu has 34-years experience in the military and has served the Ethiopia National Defence Forces (ENDF) in several capacities, including as Division, Brigade, Battalion, and Company Commander.

“This Mission is a challenging one, but we are up to the task,” the incoming Force Commander made an assurance while assuming office.

Prior to his appointment, he served as a member of the Defence Council and Head of Defence Logistics Main Department, where he was instrumental in planning, delivery, generation and integration of the Defence Capability, among others.

He holds a Masters degree in Business Administration, a degree in Leadership and Military Science and a Diploma in Law.

The handover of instruments of power between the outgoing and incoming Force Commanders was presided over by Francisco Caetano Madeira, the Special Representative of the African Union Commission Chairperson for Somalia (SRCC), who is also the Head of AMISOM.