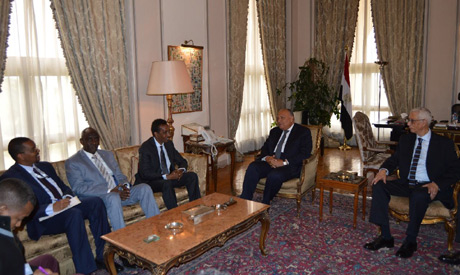 The two ministers discussed bilateral relations and Egypt’s support for Somalia’s efforts to rebuild state institutions and achieve security and stability, as well as a number of regional issues of common concern.

Shoukry stressed Egypt’s intention to continue efforts to support the Somali economy and help the country’s development, whether through Egypt’s presidency of the African Union or through bilateral cooperation.

Shoukry expressed his happiness with the continued development of bilateral ties between the two countries, highlighting multiple areas of cooperation, including in combating terrorism.

The FM also said that Egypt looks forward to signing memorandums of understanding proposed by the Somali side in political consultation, the establishment of a joint ministerial committee, and cooperation between the diplomatic institutions of the two countries.

Shoukry also praised the ongoing efforts to organise the second forum for Egyptian-Somali businessmen in the coming period. The forum aims to enhance trade and investment relations between the two countries, as well as explore new areas of cooperation between the countries of East Africa and the Horn of Africa.

The Somali foreign minister expressed his country’s wish to see enhance cooperation with Egypt in various fields as well as coordination between the two sides during Egypt’s presidency of the African Union in 2019.