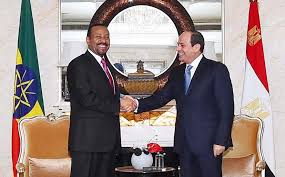 CAIRO – Egypt’s president said Sunday he and Ethiopia’s premier are to hold talks in Russia on a dam under construction on the Nile River that Cairo fears would cut its vital water share.

“I have agreed with the Ethiopian prime minister (Abiy Ahmed) to meet in Moscow and discuss the subject to move forward,” said Abdel Fattah el-Sissi, without giving a date.

“Hopefully… the issue will be resolved,” he said in a televised address tackling the impasse reached in drawn-out talks with Sudan and Ethiopia on the giant hydropower Grand Renaissance Dam.

African leaders are expected to attend a Russia-Africa summit, co-chaired by el-Sissi, in Sochi later in October.

Egypt has urged international mediation after saying the latest round of Nile talks, which ended earlier this month, hit another “deadlock.

Ethiopia, which says its project is needed to provide electricity, has rejected the call.

But Egypt is concerned the huge dam would severely reduce the flow of Nile waters and invoked its “historic rights” under decades-old treaties.

On Sunday, el-Sissi said: “We want to ensure that filling the (dam’s) reservoir and its operation would not seriously harm Egypt.”

Ethiopia has said the $4 billion dam will begin generating power by the end of 2020 and be fully operational by 2022.

The Nile is the world’s longest river and serves as a crucial artery for water supplies and electricity for the 10 countries it runs through.

Its main tributaries — the White Nile and the Blue Nile — converge in Khartoum before flowing north through Egypt to drain into the Mediterranean Sea.