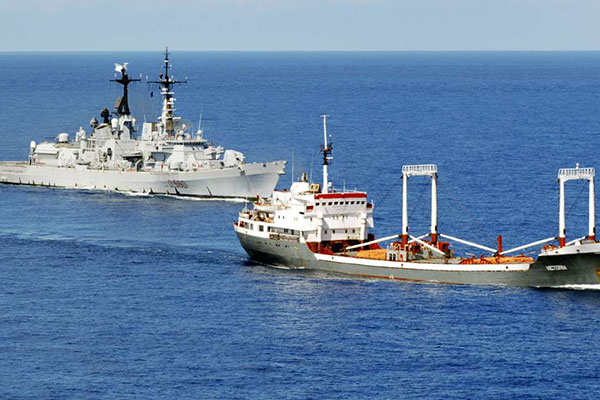 The diplomatic spat between Kenya and Somalia was poised to take a turn for the worse after leaked Somalia government documents showed that Mogadishu had put on auction offshore oil blocks in the contested territory off the Kenyan port of Lamu.

Kenya’s Ministry of Foreign Affairs declined to comment citing sensitivity of the matter.

Principal Secretary Macharia Kamau said the Kenyan government was still digesting the possible consequences of Somalia’s action even as he asked the writer “to direct his questions to the source of the document.”
Diplomatic relations between Kenya and Somalia have been on the rocks since late last year when it emerged that Somalia had held an oil exploration exhibition in London where oil blocks off the Kenyan coast were put up for auction.

Kenya waded deeper into the controversy in May with an immigration stroke that blocked Somalia’s diplomats from attending an international conference in Nairobi.

Mogadishu retaliated by directing all non-governmental organisation operating in Somalia from Nairobi to relocate to the country or cease operations.

The Somalia government says in the leaked February report titled Offshore Somalia 2019 that the country will exploit its petroleum resources effectively to achieve peace, stability and shared prosperity for all Somalis without damaging the environment.

The exhibition, which was reportedly sponsored by potential explorers, attracted furore from Nairobi.

Kenya accused Somalia of including oil blocks in the disputed 100km Indian Ocean triangle in the exhibition, with the full knowledge that the dispute is before the International Court of Justice.

The area in the Kenya-Somalia maritime border dispute is about 100,000km2 forming a triangle east of the Kenya coast. FILE GRAPHIC | NMG

Somalia and the Spectrum Geo, which hosted the Somalia oil exhibition in London and conducted a 2D offshore seismic survey dismissed Kenya’s claims that oil blocks in the disputed territory were auctioned.

Spectrum said no seismic data was acquired within the area currently subject to maritime delimitation case with Kenya at the International Court of Justice, whose ruling is expected in September.

At stake is the loss of 26 per cent of Kenya’s Exclusive Economic Zone (EEZ) and 85 per cent of the continental shelf beyond the 200 nautical miles (EEZ) limit.

Kenya’s Foreign Affairs Cabinet Secretary, Monica Juma complained in February that Somalia’s decision to offer oil blocks for sale in the contested area had undermined the principle of good faith and defeated the purpose of waiting for the Court to make the final determination.

Offshore Somalia is divided into three basins, each defined by their own individual structural regimes; Obbia Basin in the north, the central Coriole Basin, and the southerly Juba-Lamu Basin.

“Striking resemblance to the astonishingly successful plays in Kenya, Tanzania and Mozambique indicate that offshore Somalia is about to become the hottest exploration prospect in East Africa,” says the report.

In preparation for Somalia’s upcoming offshore licensing round, the country has completed acquisition and processing of 20,185km of 2D long-offset seismic data, following a co-operation agreement.

The programme complements 20,500km of existing seismic data that was acquired in 2014.

The survey design, which covers water depths of 30m to 4,000m, has allowed for seismic coverage over the shelf, slope and basin floor with dip, strike and recording time intervals suitable for defining a range of leads and prospects.

Somalia in 2014 filed a suit accusing Kenya of encroaching on 100,000 square km of marine territory with potential oil and gas deposits in the Indian Ocean. Diplomatic negotiations over the territory had dragged on for six years without success.

Kenya insists that the marine boundary is determined by a parallel to the line of latitude to the east as per the standards set by the colonial powers, which has been adopted in the marine border between Kenya-Tanzania, Tanzania-Mozambique and Mozambique-South Africa.

But Somalia wants the boundary to extend to the southeast as an extension of the land border, which would take a large swathe of what Kenya considers its EEZ.

Kenya had in 2012 submitted an application to acquire an additional 103,000 square kilometres to delineate the outer limits of the country’s continental shelf outside the EEZ of 200 nautical miles.

This hit a snag because Kenya does not have a maritime border agreement with Somalia, whereas one of the UN requirements is that countries that share the ocean must reach an agreement on the border issue.