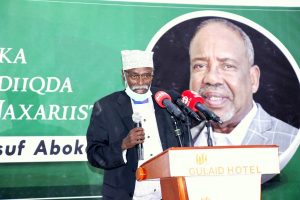 “Dr. Aden is a leader that influence community and from first time we meet I do not know time he is annoyed” said Minister Kahin.

MP Abdikadir Jirde talk to his memories about “Dr. Aden when he visited Parliament I welcome to the door, because he contributed us big ideas”

“Dr. Aden Abokor is one of the founders in volunteering voiceless people of the country” Said Director of Somaliland Youth Umbrella SONYO.

Chairman of the Somaliland National Human Right Commission Mohamed Barud that is one of the colleagues talk his personality and said “Dr. Aden is one our Inspirational during jail in Uffo period”

Former Director of SONYO, talk period they co-worked Dr. Aden and he said “During 2001 – 3 we founded many organizations, during that time Dr. Aden is our supporters, also 2002 we founded SONYO he support us and gave many advices, during past time he is one of the front line of  the conflict resolution activities of the country”.

According IPCS (Institute for Peace and Conflict Studies – University of Hargeisa), Dr. Aden was a symbol of peace and justice and a highly respected person in Somaliland where he sacrificed his entire life serving and saving his people and the beautiful country he loved.

In his biography published by Rift Valley Institute in 2019, Dr. Adan Yusuf Abokor was born in Hargeisa, Somaliland, and grew up in Aden, Yemen. He graduated from Warsaw Medical School, Poland, in 1976. He was the director of the Hargeisa Group Hospital in the early 80s and together with other young professionals was arrested and imprisoned by Siad Barre’s regime from 1981 to 1989. He was Country Representative for Progressio, a British NGO, from 1998 to 2012 and the Rift Valley Institute’s Representative in Somaliland from 2013 to 2019.

May Allah grant him the highest rank in Jannah.