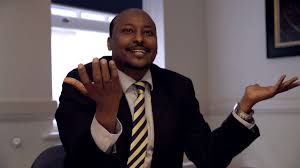 Mr. Abdirashid Mohamed Said Dualeh, the CEO of Dahabshiil group of companies speaking in an interview with BBC Somali language service expressed his thoughts on the recent statement made by President Trump during his meeting with British PM Theresa May, in which he promised a “phenomenal” trade deal after the UK leaves the European.

President Trump is currently on a state visit in the United Kingdom.

Mr. Abdirashid Mohamed Said Duale, the CEO of Dahabshiil group of companies answering questions on his opinion regarding the question of Brexit said that the UK stands to immensely benefit in terms of trade but again the wishes of people of UK must be respected at all times.

He added that the visiting US President brought along many businessmen who met with the UK counterparts during a meeting with Prime minister. During the meeting, the two sides discussed ways to integrate the US and UK trade especially those in the private sector such as Dahabshiil and others. He further said the US and UK share long relations in terms of trade because UK citizens do tender to invest in the US and Vis vas.

President Trump said that the UK should be part of the European Union, Mr Abdirashid said, “Free trade has his advantages and for every private firm to open its businesses in every country and in this instance UK citizens have opted to leave the European Union but business people and politicians have different opinions on this matter which they’re still debating and I think the UK will eventually leave the European block come October. On the other hand, the UK and US discussed ways of liberalizing trade by involving the US, Africa, and European countries and this will open opportunities to Somali owned businesses, we at Dahabshiil are happy since we operate in most of Europe, UK and US.

Mr. Abdirashid further said that Dahabshill group has already initiated the necessary changes as the UK is about to exit the European Union and that the process won’t in any way affect their business neither will our customers feel the effect since we have invested on the matter and we shall remit the currency of every country on individual basis he said.