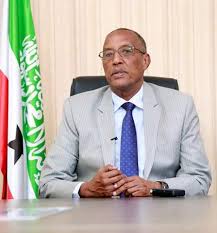 President Bihi of Somaliland faced an heated backlash after an accidental encounter of President Farmajo of Somalia in Addis Ababa Ethiopia few months back according to his speech in the Parliament. After accusations and outcry, President Bihi’s argument was, never mind, we just met in the hallway or over the invitation table as we were leaving from Abiy’s residence. The president was very agitated to even contemplate a mere chance of meeting could have even taken place let alone an arranged meeting. Mr Bihi sounded legit and reliable as he stood in front of the parliament, however, his forefinger affairs minister said otherwise and to read between the lines was no brainier. President Bihi is known to be a risk taker but at the same time has personal traits of my way or the high way. The later one works better when one ought to deal with his/her personal affairs but when it comes down to a nations interest, it’s a disaster soon to happen.

In few hours, a major and unpredicted meeting between Bihi and Farmajo will take place in Djibouti pre-arranged by Abiy of Ethiopia and Gelle of Djibouti and blessed by the United State Ambassador in Somalia. This is a major victory for the two shroud politicians of Somalia Khayre and Farmajo but a trap for Somaliland. Make no mistake, Djibouti, Ethiopia and Kenya will never entertain a separation between Somaliland and Somalia ever and the only option on the table for Somaliland would be, it’s time praise the blue flag again. Regional governments must be under pressure from the West to press both leaders to come to the negotiation table and to do so, they can only envision united Somalia. These regional powers will never look into possible Somaliland sovereignty because it’s a fact that it will threaten their own existence.

There will be winners and losers in this urgent and unpredicted meeting. Farmajo and Khayre are heading to the end of the rob of their term and since they are facing a powerful forces to oust them out of Villa Somalia, they will for sure use this as a catalyst and argue, we are always stand for the interest and the unity of greater Somalia and whatever outcome, they will be the winners. It is a win for these silent and strategic politicians. For the Regional powers, more money and recognition of their efforts or may be a plus mark on the noble peace price. The big loser of this meeting will be Somaliland and this should not be a one man show from Somaliland perspective.

The quest of Somaliland recognition is not an easy journey if ever will be possible hence will be more difficult if Bihi does not change his closed doors political views. Somaliland political system is electoral platform purported by tribal mentality and/or ideology. This is the reality in which President Bihi has to come to terms with. Before heading to regional stage for the country’s interest, any dealings or strategies should have been classified, discussed ,participated and approved by both civil society and both political parties. It was not his personal will that put him in power but a one man vote that chose him over the other two candidates. Therefore, President Bihi to behave like a dictator and take the matters into his personal view is an insult to those who elected him. It’s also a dangerous move as this will weaponize those among us who were already setting up unity movement in Somaliland communities and Somalia’s secretive political engagement in Somaliland eternal affairs. Let us hope the best and see what comes out of Bibi’s secretive entourage.