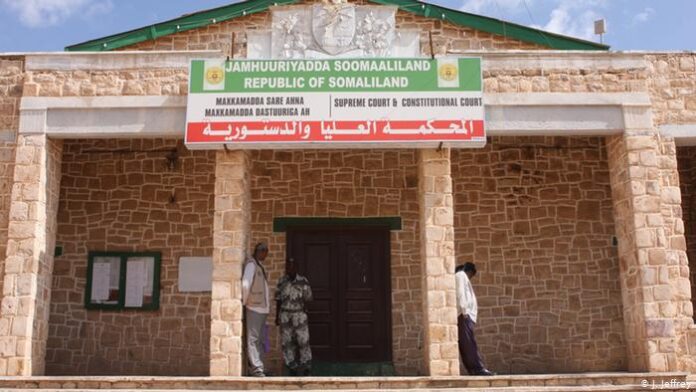 Last week, a gruesome attack took place at a tire shop in south Hargeisa. The incident involved a member of the parliament, Ahmed Kijandhe (Kulmiye Party), who allegedly refused to pay a tire shop operator 30 cents (3,000 SL SH) for filling his car’s under-inflated tires. According to eyewitnesses, Kijandhe allegedly assaulted the tire shop operator, who then pushed back and defended himself. Kijandhe left the scene and then returned with three adults, including two of his children. The three men allegedly beat the tire man with heavy metal objects, and struck him on the head. He was taken to a local hospital, and was in a coma for a while after suffering a life threatening traumatic brain injury injury. Now, his medical condition is stable.

But so far, as always, the police have not arrested or questioned any suspects for this heinous crime, including the alleged perpetrator of the crime—-Kijandhe.

Why is Kijandhe getting a special treatment? Is he getting a break from justice because he’s a member of the ruling Kulmiye party, which controls all branches of the government, including the corrupt Interior Ministry?

A broken and corrupt judicial system, a dearth of professional police force, and a myopic Attorney General Office have created a perfect storm for a tribal and a religious justice system to mushroom in Somaliland to the point where they are taking over the functions of public safety and judiciary.

As a result, Kijandhe now is hiding behind clan elders—who are trying to shield him from the responsibility of his malicious crime. According to news reports, the elders are negotiating on his behalf so the family of the victims to accept blood money, which is a blatant obstruction of justice.

But in Islam and even some cultures allow the offender to pay blood money to the victim.  In the case of Somaliland, “blood money” is a form of local customary law (“Xeer”) in order to keep the peace, and to prevent further hostility in the form of feud or vigilante justice.

In fact, in the Muslim world, the tradition of blood-money payments to  the victim—-was derived from the Quran, in which Allah  offered Muslims  a more humane option to the practice of eye-for-an-eye retribution : “A believer should not kill another believer, unless it happens unintentionally; whoever does so unintentionally must pay diyya to the family.” [Al-Nisa, 4:92].

“Diyya”  in Islamic is a monetary damages paid to the victim or the family of victims for murder, malicious bodily harm—as in the case of Kijandhe, property loss or damages. Moreover, Islam allows the victim the choice of punishing the murderer by capital punishment or blood money.

However, in Somaliland, there is no enforcement mechanism for collecting the blood money. The process of collecting and distributing has become tedious and so cumbersome, which involves the elders of two clans, and the courts have no role. There are also abuses of the manner the close kin of the victims share the blood money, which often left little or no money for the victims. In some communities, there are long outstanding overdue and a backlog of blood money, which is not fair for the victims and their families. Blood money also allows the rich and powerful to get away with murder by offering the poor victims financial compensation that they cannot turn down.

Therefore, blood money for heinous crimes needs to be reformed, because it denies crime victims justice, due process. It also undermines public safety, the law and order, and government authority.

Some people want go even further, including myself, to reinstate “Qisas” retribution (Eye for an eye justice) for all premeditated murder and other malicious crimes like Kijandhe’s case. Doing so would serve justice and equity, and would protect the security of life of the whole society, As Allah affirmed in Quran [Al-Maidah, 5:45].

In this case, Kijandhe should not be evading justice; he must be in a jail. He is not above the law. He should also be suspended from the Parliament until the court makes a decision about his fate. We need to dispense justice equally for all people regardless of their status or income.

The Police and the Hargeisa district prosecutor should do their job and arrest all suspects of this crime, including Kijandhe, who incited the violence against the tire man. What Kijandhe did was premeditated crime and malice, and he should not get away with it. However, Kijandhe and his thugs deserve the right for a fair trial and their day in court.

It is a gross injustice for the victim and his family, if the law enforcements fail to hold Kijandhe and his thugs accountable. It might also lead to grave abuses and the likelihood of vigilante justice and mob violence to continue.

Ultimately, we must come to a solution to reform the blood money restitution for crime victims. The current clan based blood money system is only rewarding perpetrators of the malicious crimes. Victims’ rights should be the cornerstone of any blood money reform, because victims and families of victims deserve justice, due process.