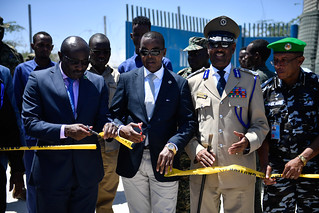 The Deputy Head of AMISOM, Simon Mulongo, handed over the community’s security tools on Monday to the Governor of Banadir region, who is also the Mayor of Mogadishu, Omar Mohamud Mohamed, in presence of the Somali Police Commissioner, Maj. Gen. Abdi Hassan Mohamed.

Commonly known as OPD (Out-Patient Department), the community, which is at the periphery of Halane basecamp, is where AMISOM first established a health facility 10 years ago to offer medical support to the Somali people.

Even after AMISOM established a Level two hospital inside Halane, the OPD community retained its identity, and has since co-existed with AMISOM, growing from slightly over 20 residents to about 496 residents, and 52 shops.

“We are not abandoning this community”, Mulongo said. “We are only handing over responsibility to the Somali federal government through the governor of Banadir. And as such, this community will continue to enjoy the amenities they were enjoying before. The generator is here, provided specifically for them, and will continue to be serviced by AMISOM supported by the United Nations Support office in Somalia (UNSOS). We will also continue to provide water to them.”

Also handed over to the Somali authorities were a security administration office block, guard towers, two 50 KVA power generators, metal detectors, and keys to the community’s main gate, which has now been sealed off. The closure of the gate means access to the OPD community by AMISOM personnel and international staff has now been cut off.

Mulongo said that those who operated shops within OPD will have to relocate to the designated Marine market.

“The closure today is part of the Somalia Transition Plan between AMISOM and the federal government. We started with the Somali National University in July 2017, the Mogadishu National Stadium in August 2018, Jaalle Siyaad Military Academy in February 2019 and the Warsheikh Forward Operating Base in September 2019,” added DSRCC Mulongo.

The Mayor for Mogadishu, Mohamud Mohamed, said that in its early days, OPD provided invaluable medical support to the Somali people when they needed it the most, especially at a time when the country’s medical system was in disarray due to terrorism.

“We are now signing the handover of the old OPD between AMISOM and the Banadir Regional Administration, on behalf of the FGS. But this is not the first facility that AMSIOM has handed over to the federal government, and we hope that such handover exercises will continue, so that Somalia can fully take care of its security responsibilities,” he said. 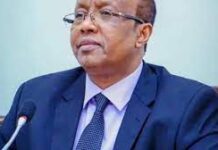