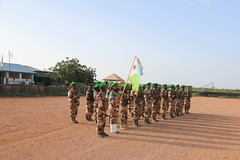 Mogadishu, 21 December 2019 – The Djiboutian contingent serving under the African Union Mission in Somalia (AMISOM) has deployed a new battalion, the 7th Battalion, which is replacing the 5th Battalion, whose tour of duty has come to an end.

The AMISOM Djibouti contingent commander, Col. Mohamed Ibrahim Mousa on Friday bid farewell to the departing troops at Beletweyne Airport and thanked them for their dedication to duty and for advancing AMISOM’s mandate during their time in Somalia.

“They have consolidated the peace, fulfilled their duty with competence, responsibility, and efficiency. I congratulate the outgoing battalion commander, Col. Abdirahman Hared Riyale for the excellent work during his tour of duty in Somalia,” said Col. Moussa.

Col. Riyale urged officers to cooperate with his successor and work towards fulfilling the AMISOM mandate. “I welcome my successor and advise him to collaborate with everybody in the mission to succeed,” said Col. Riyale.

The incoming commander, Col. Abdullahi, who has served under AMISOM before, said, “Two years ago, I was in Bulaburde. I am familiar with the people and culture, which I think will ease my work.”