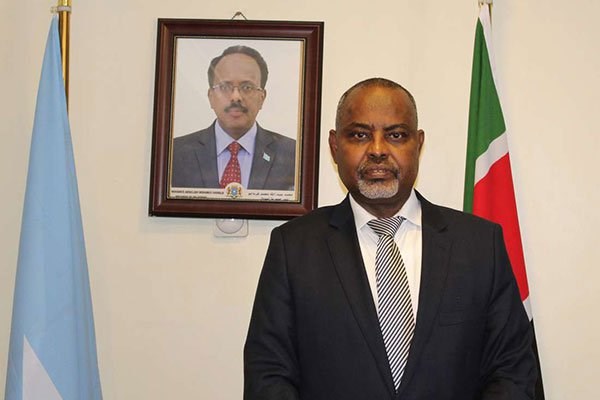 The current Somalia ambassador to Kenya has said that the ministry of foreign affairs is the only institution which is entitled to lead Somalia’s foreign policy.

This was disclosed by Hon. Mohamud Ahmed Tarsan debunking the notion from the ministry of health of Somalia informing UN agencies that Somalia officials won’t attend conferences which will be held in Niarobi from now on.

The ministry of health called on the UN agencies to hold the meetings to other countries whereby it will be easy for the attending officials to have smooth travel.

Mr. Tarsan has said that the only ministry which has the prerogative right to lead the country’s foreign policy is none but the ministry of foreign affairs.

He added that the ministry of foreign affairs has the right to speak on behalf of the nation.

Mr. Tarsan told BBC Somali Services that Kenya’s FM, Ms. Monica Juma told him that Kenya is about to respond to the statement from the health ministry of Somalia banning gatherings that were supposed to be held in Kenya due to the strained ties between the neighboring countries.

The Somali ambassador to Kenya met with Monica Juma in a meeting.

Kenya-Somalia ties went from bad to worse after Kenya announced the stoppage of direct flights from Mogadishu to Nairobi. Somalia officials were recently denied entry visa while at Joma Kenyatta airport. Kenya & Somalia are locked horns over oil dispute in the Indian Ocean.