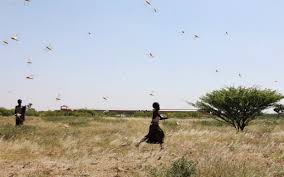 Farmers in southern Somalia are shooting at huge swarms of locusts with heavy machine guns in a desperate attempt to save their crops, according to media affiliated to the jihadist group Al-Shabaab.

According to the group’s media, insects that have infested farmland around the southwestern town of Tiyeglow, an Al-Shabaab stronghold, are being shot at with a PKM rifle — a machine gun version of the Russian Kalashnikov.

The news comes as the country experiences its largest locust infestation for 25 years. Since July, swarms of Desert Locusts from nearby Yemen have invaded vast swathes of the Horn of Africa.

A typical swarm can contain up to 150 million insects per square kilometre. Each locust can grow up to 4.3 inches long and travel up to 95 miles a day depending on the wind. Every day, an average swarm can consume the equivalent of a year’s worth of food for 2,500 people.

According to the UN’s Food and Agriculture Organisation (FAO), the locusts have already destroyed 70,000 hectares (175,000 acres) of farmland in Somalia and neighbouring Ethiopia.

The plague has been far more serious than experts projected it would be and has been made worse by unseasonably heavy rainfall, which has killed hundreds of people across East Africa over the last few months.

According to a spokesperson from the FAO, the favourable weather conditions mean that there is a high chance that the locusts will continue breeding rapaciously for the next three months.

Somalia’s chaotic fighting makes spraying pesticide by aeroplane – which the FAO has called the “ideal control measure” – impossible, the agency said in a statement.

The insects have compounded Somalia’s dire humanitarian crisis. The east African nation of 15 million people has been struggling to recover from a severe drought that ended in 2017.

In August, aid agencies said that over 2 million people were threatened with severe hunger as crop yields continue to fail.

Aid agencies now say that the locusts mean that many Somali farmers will face starvation unless relief reaches them over the next few months.