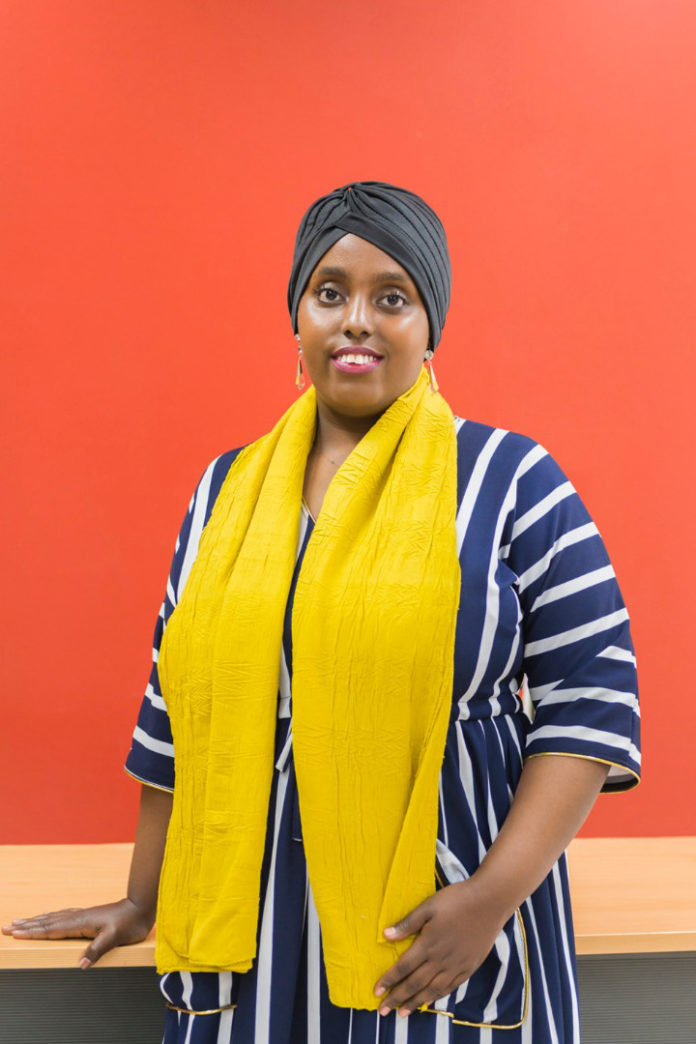 29-year-old Rahma is a World Bank as a cloud engineer.

Growing up in a refugee camp was not easy for Rahma Mohamed Farah Ahmed, life took a bumpy turn when her family moved to Saudi Arabia from Somalia, a year before she was born.

As refugees, it was hard for the family to get certain services such as employment opportunities, health insurance and education.

But the latter was what mostly affected the 29-year-old. Amidst her struggles of identity, Ahmed and her sister didn’t have money to access higher education.

Although Ahmed and her sister were ranked among the top best candidates in Saudi Arabia in 2008 and 2017 respectively, University education was not a guarantee for the sisters.

A year ago however, her story together with that of her entire family changed when they relocated to Rwanda. Ahmed in 2018 was able to enroll into the magnificent Carnegie Mellon University, an institution that has made her pursue her a dream career.

Today, on top of working with the World Bank as a cloud engineer, Ahmed has also relocated her family to Rwanda and also helped her sister to get admitted to African Leadership University.

Ahmed recently spoke to Sunday Magazine’ Edwin Ashimwe about her journey that saw Rwanda become a destination for her education and her family settling in Gisenyi town.

How was life like growing up in a refugee camp?

I lived in a refugee camp for the first five years of my life. That was the life I knew, living in tents with no freedom of movement.

But I should say that my biggest challenge was that the Somali government was not recognising me as a citizen. Which means that I didn’t have any travel documents and this made it hard for me to go anywhere.

Talking about your identity, how were you able to get that?

Well I should say that this took quite a long time for all my relatives, but it was up until May 2017, I remember that’s the same year in which my sister had graduated with an outstanding 99.78 GPA.

The government of Somalia recognised us as citizens. And this is how we finally got our documents such as passports, insurance cards among others.

How did this help you chase your dream?

I knew I was a refugee and not a citizen of that country, I was black and a woman, as far as we know that would literally put you at the bottom of the chain.

Needless to mention, I still had my dreams, dreams that I had vowed to relentlessly pursue regardless of all odds. The fact that I had always wanted to study abroad, no obstacle would deter me from pursuit of my dreams.

I had just put in my mind that I would find a University elsewhere on the globe and I would embark on my passion for engineering.

You seem to have a special attachment with education, what can you tell us about your academic background?

I love the saying by renowned writer and poly math, Benjamin Franklin that says “An investment in knowledge pays the best interest”.

As much as it has not been a smooth journey, I can say that I have tried in proving that excellence is possible regardless the challenges that one can face during studies.

At school, I was not the happiest student, but I know that I excelled. I was ranked among the 10 ten outstanding students in Saudi Arabia back in 2008, this roughly earned me a sponsorship into Prince Sultan University where I graduated with a Bachelor’s degree in software engineering.

I later started pursuing a post-graduate degree at the same university but my scholarship was cut short under mysterious circumstances.

You have been in Rwanda for a year or two now, how did this come about?

I got an opportunity to work with a Sudanese firm back in Saudi Arabia. I was working as a web content developer, however time came and the firm closed yet this was my only source of income for all the 5 years I had worked in the firm.

My dad was a simple chef and my mom, an interpreter. This motivated me to do all I could to apply for school. I applied to 16 different Universities with no success.

I had almost given up when I came across Carnegie Mellon University, that was in Rwanda.

I had never heard about the country and when I researched about it, I got to know about the 1994 Genocide against the Tutsi, this gave me a different picture, thinking that there were wars just like it is back at home. I thought my journey was done before it even began, little did I know that I was wrong.

I knew there and then that my life was going to change, and that whatever I was facing, I wasn’t going to face it anymore.

It was funny that when I got to the airport, people were welcoming, I was told to only look for the VISA at the airport and when I got to school, they were hosting us for a whole month as we looked for accommodation. It was a smooth yet again an unbelievable transition for me.

You talked about your parents coming to Rwanda, what does this mean to you?

My parents right now are in Gisenyi (both retired now), with my other four siblings. My sister and I are here in Kigali studying as I remotely work with the World Bank.

Bringing my parents in the country was an effort to cater for them and my younger siblings since I was the one earning and providing funds for my family.

Besides, from experience I knew that residing in Rwanda would help more than where they were.

Let’s talk about your current academics, how has this reintegrated you back to your dreams?

To start with, I have never seen a collaborative education community like I have here in Rwanda. I was appointed as a teaching assistant and this has helped me develop leadership skills on the other hand.

Secondly I am thrilled by the fact that our school gets us (We are actually 17 different nationals) access to the many different conferences that take place in the country.

This is an opportunity, where we get to network with very influential personalities, something that has helped us borrow a glimpse to our different careers.

What in particular have you observed about Rwanda as a country?

I am impressed by the leadership of the government, it is visionary and does what impacts people in the long run. The different facilities and projects have attracted many and this has put the country in the lime light irrespective of its past turmoil.