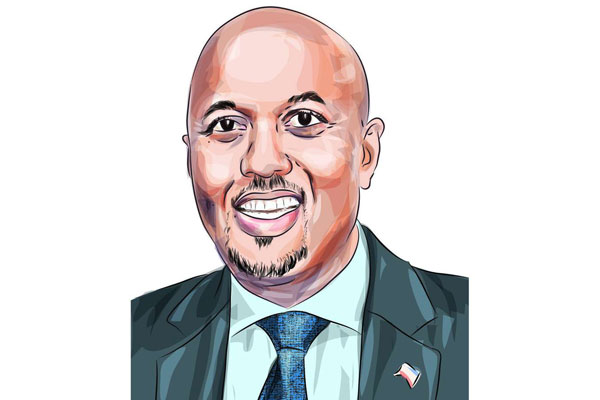 A portrait of Somaliland head of the Liaison Office in Kenya Bashe Omar. He is hopeful Somaliland will be a recognised as an independent country.

The Somaliland head of the Liaison Office in Kenya Bashe Omar talked to FRED OLUOCH about the changing geopolitics in the Horn.

Twenty-eight years after Somaliland declared its independence, the international community still won’t recognise it. What do you make of this?

When we talk to countries in Africa and the West, they say they understand our position — that we have different operations and we have made tremendous progress in maintaining democracy compared with Somalia. We had formed a union with Somalia in 1960, but later found that the union could not work and it collapsed in 1991. We are asking for a divorce from Somalia. Recognition will happen, and it is just a matter of time. The responses from the EU, US and the Middle East have been encouraging.

Turkey has in the past sponsored talks on a reunion. Would Somaliland consider this?

For the past 28 years, our mission has been clear — independence. In 1991, 97 per cent voted in a referendum for independence. We have full separation and we have no interactions with Somalia. There is no government-to-government trade, but there is people-to-people trade as neighbouring countries are working side by side. But we don’t want political reunion with Somalia. We attended the talks to make our position clear, that we want independence.

The world has been praising your ability to hold peaceful multiparty elections regularly.

We have been functioning as a government for 28 years with a constitution, judiciary, national currency and a flag. Currently we have representatives in Kenya, UK, Belgium, Turkey and Djibouti, and the UAE and Ethiopia are two of our biggest trading partners. All these countries have trade and government links with Somaliland and we do not get aid from any these countries. Our $400 million budget is generated from internal revenue collection and the port. This is higher than some African countries that are recognised.

In 2005, the African Union sent a fact-finding mission to investigate the validity of your claim for independence. What happened to the report?

At that time, some countries blocked the report from being tabled. They believed they could keep Somaliland isolated, or pursue unity with Somalia. The committee thought Somaliland had become a “pariah region” by default.

That is just an excuse. In most cases where countries have separated — like Ethiopia and Eritrea, Sudan and South Sudan — the push for secession was coming from outside. We have presidents elected regularly through universal suffrage; we have institutions but the Somalia presidency does not control territory 10km outside Mogadishu.

Somaliland has maintained liaison offices in some of the countries you mentioned for almost a decade. How has that helped?

In the absence of official recognition, we cannot have full-fledged embassies, but our ambassadors have diplomatic status in Kenya, the UK, Ethiopia, Belgium, Turkey and Djibouti.