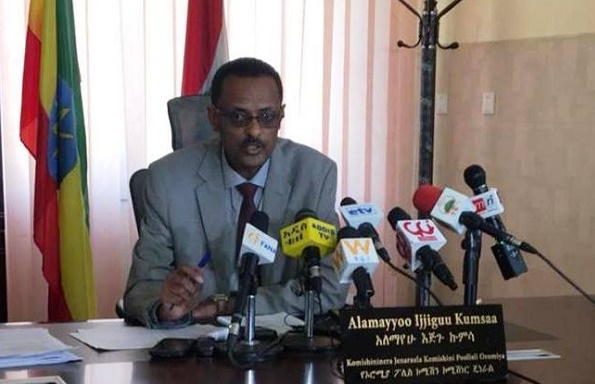 Addis Ababa December 24/2018 Oriomia Regional State has vowed to put on “zero tolerance” for any destabilizing forces, who have been committing mass killings and armed robbery in the region.

In a press briefing to journalists today, Oromia Police Commissioner, Alemayehu Ejigu said in the past four months the region has seen bloody and deadly attacks perpetrated by lawless groups in Western Oromia.

According to the Police Commissioner, several lives were lost including 12 policemen, 29 civilians and a considerable loss of public and private property during the attacks.

He pointed out that 77 police officers and 40 militias were injured during the past four months.

Alemayehu blamed the anti-reforms groups who are instigating and financing violence, and called on the public to cooperate with the security forces in order to stop organized conspiracies in the region.

Apart from tolerating the heinous acts committed by these groups, the government has been inviting them for a constructive dialogue to resolve the issues in a peaceful manner, he indicated.

He further stated that Oromia security forces have been ordered to take the necessary measures at all levels to restore peace and stability in the region, he confirmed.

About 2072 Kalashnikov and 3 million Birr were looted by the group from Qelem Welega and Western Welega, the Commissioner added.

The Commissioner also blamed Oromo Liberation Front’s (OLF) militants who are responsible for igniting the crisis and destruction in Western Oromia.

Despite the agreement that leaders of OLF have signed with the government and in spite of their pledge to continue peaceful struggle in the region, they are not abiding with the terms of the agreement, he underscored.

The Commissioner said that the illegal actions of the groups including blocking highways have resulted in regrettable loss of lives indicated.

He stressed that the regional police will no more tolerate the destructive activities of these forces and it will take any necessary measures in this regard, he stated.

He also confirmed security officials have arrested 15 individuals suspected of carrying out assassination who have been operating under a group name called ‘Abaa Torbee’ in Oromia Regional State.